© The Author(s) 2022. Open Access This article is licensed under a Creative Commons Attribution 4.0 International License (https://creativecommons.org/licenses/by/4.0/), which permits unrestricted use, sharing, adaptation, distribution and reproduction in any medium or format, for any purpose, even commercially, as long as you give appropriate credit to the original author(s) and the source, provide a link to the Creative Commons license, and indicate if changes were made.

Methods: Veterans enrolled in the “Randomized On-/Off-pump Bypass” (ROOBY) trial with new-onset POAF post-CABG were compared to those without POAF with respect to 10-year atrial fibrillation (AF) and mortality rates. Multivariable logistic regression examined whether AF was independently associated with 10-year survival after holding other preoperative risk factors constant.

Conclusion: Post-CABG, ROOBY POAF veterans had higher rates of 10-year AF, which was negatively associated with 10-year survival; however, this association was not significant. Given that POAF may adversely impact 10-year AF rates, additional investigation appears warranted to improve future POAF patients’ care.

While it is anticipated that most patients who develop POAF after CABG with no underlying history of arrhythmia will revert back to sinus rhythm over time, the actual long-term atrial fibrillation (AF) rates of this post-CABG POAF patient population are not well known. Additionally, the factors associated with long-term AF and long-term survival rates in the POAF population have not been extensively examined. As a ROOBY-FS sub-study, this follow-up investigation builds on prior ROOBY trial reports by examining POAF versus non-POAF patients’ 10-year AF and survival rates with the purpose of determining if POAF impacts these longer-term rates.

Briefly summarizing details of the ROOBY trial[4], 2203 veterans were enrolled at 18 VA medical centers between February 2002 and May 2008. These patients were randomized to undergo off-pump vs. on-pump CABG. Evaluated at one year and five years, the clinical endpoints included death, myocardial infarction, and repeat revascularization[5]. For the ROOBY Follow-up Study (ROOBY-FS), the clinical endpoints of death or repeat revascularization were also assessed at 10-years.

As a ROOBY trial approved sub-analysis, patients were examined for the development of new-onset POAF. At one year and five years post-CABG follow-up, clinical outcomes were compared between patients who developed POAF vs. those who did not[1-3].

For these sub-analyses, POAF was defined as any new-onset irregular atrial rhythm lasting longer than 30 minutes, which was similar to the Society of Thoracic Surgeons’ definition of atrial fibrillation. Patients with shorter episodes of atrial fibrillation were excluded, given that the clinical significance of isolated, self-terminating episodes is less certain. Patients with a history of preoperative atrial fibrillation were excluded. This current investigation examined the 10-year rates of AF and death for these two comparative groups. At the time of a 10-year follow-up, ROOBY patients’ AF and vital status were based upon electronic medical records data extracted centrally by the VA Perry Point Cooperative Studies Program (CSP) Coordinating Center’s dedicated nurse coordinators. The VA Corporate Data Warehouse and Medicare databases provided independent verification for chart abstractions performed; additionally, 10-year deaths were verified using both VA and non-VA vital status registries. Discrepancies between databases and chart abstractions were adjudicated by the ROOBY-FS Endpoints Committee (EC); the ROOBY EC included cardiologists, cardiac surgeons, and the CSP nurse coordinator. Using this combined approach to determine survival status, the accuracy rate has been previously reported as > 99%[6].

Baseline patient characteristics for POAF vs. non-POAF are listed in Table 1. In general, patients who developed POAF were older and had more medical co-morbidities than non-POAF patients.

Patient characteristics at the time of study enrollment

At a 10-year follow-up, 69 patients lacked sufficient detail in the electronic medical record to determine their long-term atrial fibrillation status; these patients were excluded from the current analysis. Among 10-year survivors, atrial fibrillation rates were higher for the POAF group (18.9%, n = 64/338) as compared to the non-POAF group (5.8%, n = 61/1048); P < 0.001. 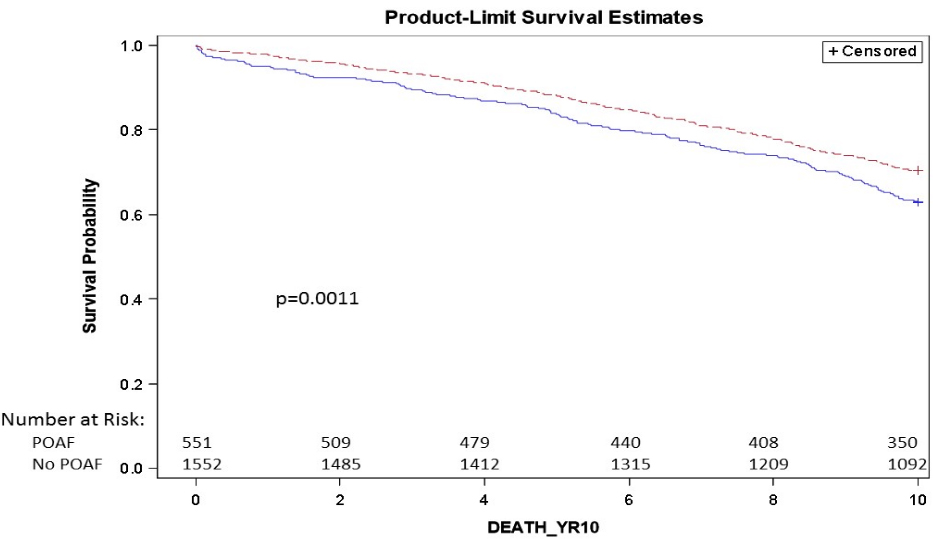 This investigation found that, of the 26% of patient enrollees in the ROOBY trial who developed POAF after CABG, approximately 19% had AF at 10 years; as such, these patients may benefit from counsel that there is about a 1 in 5 chance of needing long-term anticoagulation and rate control. Patients who did not have POAF had a significantly lower 10-year AF rate of 5.8%. Although the 10-year survival rate of 63% among the POAF patients was also significantly lower than the 70% rate for non-POAF patients, this was unlikely to have been directly related to POAF because it was not found to be independently associated with 10-year risk-adjusted survival using multivariable regression analysis.

These findings appear consistent with the literature examining both the short and long-term incidence of AF and survival among patients with POAF. The incidence of POAF after CABG, approximately 20%-30%, does not appear to have changed significantly over time[7-10]. Patients who developed POAF seem to have higher subsequent rates of AF, as was seen in the current investigation.

However, in other studies, an association of POAF with late AF and reduced long-term survival was not seen. Taha and colleagues’ Swedish registry study of CABG patients (2007 to 2015, n = 24,523) showed no association of POAF with all-cause mortality; adjusted mortality rates were similar to those of non-POAF patients at a median follow up of 4.5 years (adjusted hazard ratio 1.08; 0.98-1.18)[12]. Similarly, our investigation, which examined whether there was an independent association between POAF and survival, did not find one. Rather, the association may have been confounded by other patient factors, such as diabetes, HTN, and COPD, which are more prevalent among patients who develop POAF[13]. In such cases, preoperative identification of these patients and heightened attention to their postoperative management might avert POAF in these cases. Strategies to do so include may include the use of beta-blockers, correcting electrolyte imbalances, and judicious use of inotropes[14]. As well, for patients who do not possess traditionally known risk factors of POAF, research examining serologic markers may provide a useful means of preoperatively identifying patients[15] who are at higher risk for POAF and therefore may benefit from closer attention during their postoperative recovery.

Limitations of this ROOBY 10-year follow-up investigation include the inherent challenges related to its study’s retrospective, observational design. As the 10-year cause of death was not assessed, there was no ability to differentiate noncardiac deaths from cardiac-related causes. Also, death could not be used as a competing event for the comparison of POAF versus non-POAF evaluations of 10-year atrial fibrillation rates. As many risk factors for survival were more prevalent in POAF patients, the 10-year survival comparison between POAF versus non-POAF patients may have been biased. We did not have sufficient granularity to determine the effect of diabetes or hypertension control. As well, the survival curves presented are not risk-adjusted. Unfortunately, data on the use of anti-thrombotic agents, which may impact survival during the 10-year follow-up period, were not collected. Finally, the ROOBY trial’s population consisted primarily of male veterans with multiple co-morbidities; thus, these study results may not be generalizable to women or non-Veteran populations. As regards the former, however, it is noted that POAF may not associate with differences in gender-based survival[16].

These limitations notwithstanding, this ROOBY-FS 10-year investigation shows that patients who experience postoperative atrial fibrillation after CABG are more likely to have 10-year atrial fibrillation and reduced survival at the time of long-term follow-up. At the time of discharge, patients with POAF may benefit from counsel to alert them that it is possible their AF may persist or recur and that assessment and counsel on the risk-benefit ratio of long-term anticoagulation may ultimately be necessary. Patients with POAF who have higher rates of co-morbidities may benefit from prospective studies to determine whether more frequent monitoring and sustained management of these associated health issues could reduce their long-term risk of atrial fibrillation and death.

Special thanks to Annette Wiseman, Darlene Kemp and Shirley Lu at the Perry Point Cooperative Studies Program Coordinating Center for their extraordinary administrative, clinical and analytic support as well as to the Research and Development Offices of the Northport VA Medical Center.

Produce all statistical analytical reports as well as their official interpretation: Collins JF

Drafted the first manuscript and coordinated all manuscript revisions including the final manuscript’s review/approval with all other co-authors (i.e., Shroyer AL, Carr BM, Grover, FL, and Almassi GH): Quin J

The ROOBY-FS protocol, published by the New England Journal of Medicine, can be accessed at: https://www.nejm.org/doi/suppl/10.1056/NEJMoa1614341/suppl_file/nejmoa1614341_protocol.pdf. Source documents are available upon written request from Ms. Annette Wiseman at the Department of Veterans Affairs Cooperative Studies Program Coordinating Center in Perry Point, Maryland and ROOBY-FS data will be made publicly available per Department of Veterans Affairs policies five years after publication of the final 10-year main manuscript’s results. 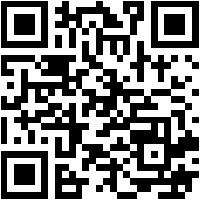