This article belongs to the Special Issue Advances in the Management of Cardiac Amyloidosis
Views:268 | Downloads:117 | Cited:

© The Author(s) 2022. Open Access This article is licensed under a Creative Commons Attribution 4.0 International License (https://creativecommons.org/licenses/by/4.0/), which permits unrestricted use, sharing, adaptation, distribution and reproduction in any medium or format, for any purpose, even commercially, as long as you give appropriate credit to the original author(s) and the source, provide a link to the Creative Commons license, and indicate if changes were made.

Results: A higher value of LV thickness, E/E’, and RRSR and lower LV volumes, EF, GLS, MBLS were observed in patients with CA than the ones with only TTRv. During follow-up (median of 7.7 years), 25 major events (23 cardiac death and 2 appropriate ICD shocks) occurred. The logistic univariate analyses showed that LV EF, LV septal thickness, E/E’, GLS, and MBLS were all predictors of cardiovascular death. In multivariate analysis, MBLS was the only independent predictor of major events. A cut off of -14 of MBLS was selected as the best value to discriminate a worse prognosis on Kaplan-Meyer analysis.

Familial transthyretin amyloidosis due to a mutation of the gene coding for transthyretin (TTRv) is one of the three most frequent subtypes, together with light chain (AL) and wild-type TTR amyloidosis (wtTTR)[1-3]. Among these, mutated TTR represents the most uncommon form of cardiac amyloidosis (CA).

In TTRv patients, penetrance and disease phenotype is variable according to the different well-known TTR gene mutations[4]. In the clinical management of carriers, the identification of early cardiac involvement, ideally in a presymptomatic stage, is of paramount importance to achieve correct management and early treatment.

In clinical practice, echocardiography is the imaging tool most used during both initial evaluation and follow-up of CA patients. A relative “apical sparing” pattern of longitudinal deformation is an easily recognizable, accurate, and reproducible method of differentiating CA from other causes of left ventricular (LV) hypertrophy[8].

On the contrary, no large studies have evaluated the prognostic role of an integrated echocardiographic approach in patients with ATTR amyloidosis with cardiomyopathy especially in the early stage of the disease.

Our study aimed to assess the best conventional and strain-derived echocardiographic prognostic parameters in the early clinical stage of ATTRv amyloidosis with cardiomyopathy.

In total, 119 patients (60 men and 59 women; mean age 48 ± 11 years), belonging to seven unrelated families with TTR gene mutation (Glu89Gln, Phe64Leu, and Thr49Ala) followed at the Department of Cardiology of University Hospital of Messina, were prospectively enrolled from June 2010 to February 2018. None of the included patients had evidence of monoclonal protein in the serum or urine, a monoclonal population of plasma cells in the bone marrow, or other diseases that could be responsible for secondary amyloidosis.

The study was approved by our institutional review board. Informed consent was obtained from all patients.

Standard echocardiographic examinations were performed in all patients using a commercial ultrasound machine (My Lab ALFA, Esaote, Florence, Italy) equipped with a 2.5 MHz phased-array transducer. Parasternal short-axis views at the basal, mid, and apical levels and three standard apical views (4-chamber, 2-chamber, and LV outflow long-axis) were acquired. The same cardiologist performed all examinations. The following measurements were obtained according to recommendations of the American Society for Echocardiography: diastolic thickness of the LV basal anterior septum (LVST), basal posterior wall thickness, LV volumes (end-diastolic volume and end-systolic volume), EF, and LV diastolic function quantified by the ratio between the E-wave velocity of the pulsed-wave Doppler mitral flow image and the early diastolic velocity of the septum at the mitral annulus level (E’ wave) on tissue Doppler imaging[10,11].

The whole-body scans were visually evaluated by consensus of two experienced nuclear medicine physicians who searched for cardiac radiotracer accumulation; readers were blinded to echocardiographic data.

A semi-quantitative score was obtained based on the results of planar images as previously described by Perugini[12]. Briefly, a score of 0 signified absence of cardiac uptake, 1 indicated mild uptake less than bone, 2 indicated moderate uptake equal to the bone, and 3 indicated strong uptake with mild or absent bone uptake.

Readers evaluated the eventual presence of cardiac radiotracer accumulation as positive when a semiquantitative score of 2 or 3 was found.

Patient outcome was evaluated from the day of the first visit to the day of the last medical contact (periodic ambulatory work up in our institute or telephone contact). The major events considered were cardiac death and appropriate implantable cardiac defibrillator (ICD) shock. The cause of death was derived from medical records or death certificates. The definition of cardiac death required the documentation of significant arrhythmia or cardiac arrest or death attributable to congestive heart failure. In the case of out-of-hospital death not followed by autopsy, sudden unexpected death was classified as cardiac death. Implantable cardiac defibrillator shocks were designated appropriate if triggered by lethal arrhythmias: ventricular tachycardia above the programmed cut-off of the ICD (12 intervals at 180 b.p.m.) or ventricular fibrillation. A complete interrogation of the ICD was performed by the referring physician to confirm the appropriateness of the shock[13].

All cardiovascular events were assessed by two independent cardiologists, who were blinded to clinical and echocardiographic patients’ data.

Continuous variables were expressed as mean + SD or median (25th; 75th percentiles). Categorical variables were expressed as a percentage. The comparison between continuous variables in patients with and without cardiac events was performed by Student’s independent t-test or the Wilcoxon test as appropriate. A Cox regression analysis was performed for the identification of predictors of cardiovascular mortality-free survival. Receiver operating characteristic (ROC) curves were performed to find the best cut-off by sensitivity and specificity for variables. The Kaplan-Meier curves were processed, with the log-rank test for the comparison of survival curves. P-value ≤ 0.05 was considered significant. Statistical analysis was performed using dedicated software (IBM SPSS Statistics, v 26.0, Chicago, Illinois).

In total, 119 patients were identified; 20 patients were excluded according to the presence of previous heart diseases (previous myocardial infarction in 1 patient and moderate-severe aortic stenoses in 5 patients) and NYHA ≥ III (14 patients). Therefore, our population consists of 99 patients with TTRv (45 Glu89Gln, 40 Phe64Leu, and 14 Thr49Ala) in NYHA functional class I or II and had no clinical history of previous cardiac disease. 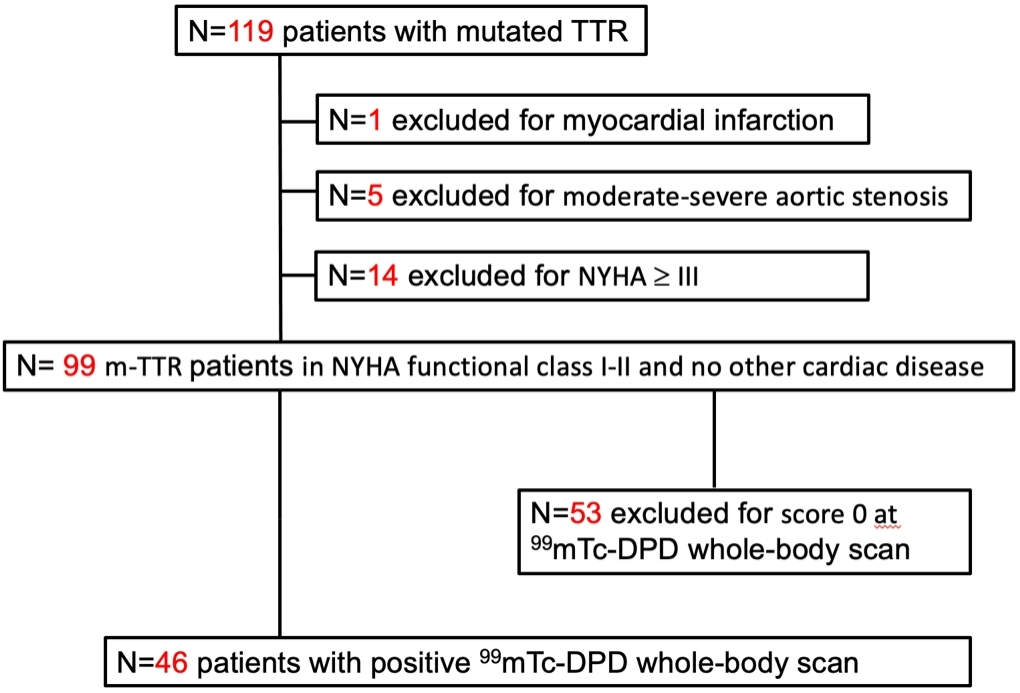 The CA group showed higher values of interventricular septal (IVS) thickness, LV posterior wall thickness, and E/E’ than the control group. LVEF was significantly lower, but still within the normal range, in the CA group than the no-CA group [Table 1].

Demographic, clinical, and echocardiographic variables in CA and control group

The logistic analysis [Table 3] showed that LV EF, LVST, E/E’, GLS, and MBLS were all predictors of cardiovascular death in univariate analyses.

The multivariate analysis showed that, among eco-derived variables, MBLS was an independent predictor of mortality [Table 3].

According to ROC analysis, a cut-off of -14 of MBLS was the best result in terms of combined sensitivity and specificity in identifying major cardiac events on follow-up (sensitivity 100%, specificity 70%, with an AUC 0.81).

The patients were divided into two groups based on the previous MBLS value found by ROC curve. Kaplan-Meyer analysis across the TTRm CA population showed a significantly reduced survival in patients with a MBLS lower than -14 (P < 0.001) [Figure 2]. 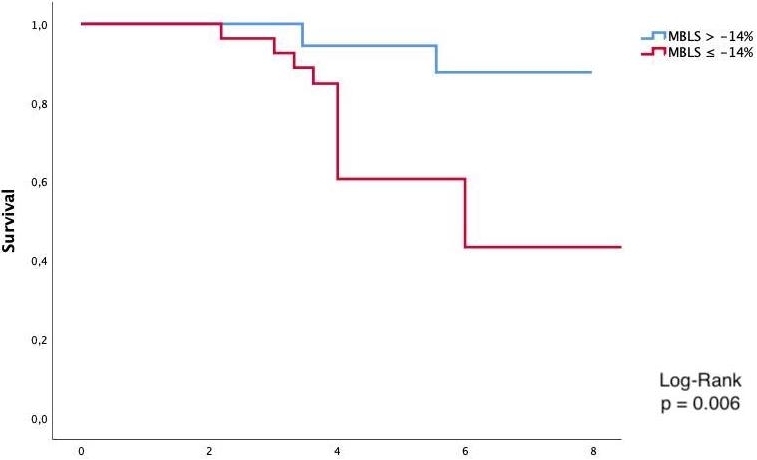 The main results of the present study are: (1) longitudinal dysfunction is observed in TTRv patients with CA in the early stages; (2) mediobasal LV longitudinal dysfunction is the best echocardiographic predictor of cardiac death in ATTRv amyloidosis with cardiomyopathy; and (3) a relative apical sparing of strain is not a predictor of cardiac death in TTRv CA in patients with non-severe heart failure (NYHA I-II) and no other cardiac disease.

In the present study, we showed that strain imaging is not only useful for diagnosis, but it is a powerful prognostic indicator of long-term survival even if applied in the subset of early stages ATTRv amyloidosis with cardiomyopathy.

Previous studies demonstrated the value of tissue Doppler and strain imaging for diagnosis and staging of cardiac dysfunction in patients with CA[14-16] as well in other systemic diseases with cardiac involvement[17]. Global longitudinal strain and apical sparing have been shown to be an accurate diagnostic marker of CA.

A relative apical sparing of strain has been reported as the only independent predictor of major adverse cardiac events in AL CA[8,9,19]. Senapati et al.[9] studied 97 patients with a definite diagnosis of CA (59 AL, 23 wtTTR, and 15 TTRv) and found that, among predictors (AL subtype, EF, and NYHA class ≥ III), the ratio between apical and mid-basal segments remains independently predictive of all-cause mortality or heart transplantation. Interestingly, Senapati et al.[9] showed a predictive value of mortality according to the ratio between apical and mid-basal segments particularly in patients with EF lower than 45%. Differently from Senapati’s study[9], we enrolled a homogenous cohort formed by early-stage TTRm CA who showed preserved EF.

The clinical evolution and follow-up of ATTRv amyloidosis with cardiomyopathy are very different compared to AL CA.

Light-chain amyloidosis is associated with rapidly progressive disease due to cardiotoxic effects with a diffuse impairment of myocardial deformation. On the other hand, TTR amyloidosis, although it tended to have higher mass and wall thickness, had a mild depression of LV systolic function.

GLS was not proven as an independent predictor of mortality in previous studies[20]. This is due to the compensative value of preserved apical deformation on the global value of LV deformation.

In the present study, we demonstrated that MBLS, avoiding apical segments, can be a helpful independent predictor of cardiovascular mortality over time, especially in patients in the early stages of TTRv amyloidosis with cardiomyopathy.

Our results extend and confirm the research of Siepen et al.[20], in which impairment of mid-ventricular deformation was a strong adverse predictor of survival in TTRwt amyloidosis with cardiomyopathy.

A major limitation of our study was the small number of patients. However, the prevalence of the disease is very low and collecting a larger population is challenging. Patients may have received interim therapies that may have affected prognosis.

Another major weakness was the lack of cardiac biopsy specimens available for histopathology. However, this procedure could not be indicated in our asymptomatic patients. Nevertheless, the existence of previous studies on the histopathologic changes of CA allows us to hypothesize reliably on the pathologic abnormalities that may correlate with and explain the imaging findings.

Systolic longitudinal function is impaired early in ATTRv amyloidosis with cardiomyopathy, and this alteration is related to abnormalities of LV morphology and function. Impairment of systolic function in mediobasal LV segments shows a great prognostic role in predicting cardiovascular mortality over follow-up. Further studies in a larger sample of patients with amyloid deposition are needed to confirm our results. 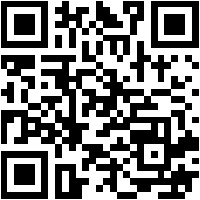