This article belongs to the Special Issue Insights into Interventional Neuroradiology on Cerebrovascular Disease: From Past to Future
Views:110 | Downloads:22 | Cited:

Endovascular treatment of brain aneurysms with flow diverter device can be technically difficult. Obtaining distal access through the wide neck of a large or giant aneurysm may be challenging and sometimes the microcatheter needs to be looped inside the aneurysm. However, the inability to resolve this loop and to straighten the microcatheter can preclude flow diverter placement. This brief report presents four cases of large/giant aneurysms treated with flow diverter device, in which our innovative stent-retriever anchor technique was used to obtain the distal access of the parent artery. All procedures were technically successful, and no complications were recorded.

Few techniques have previously been described to solve this problem as the “balloon”, “stent”, “Solitaire”, and “sea anchor” techniques[4-7].

We report a small retrospective series in which a low-profile stent-retriever (Aperio®, Acandis GmbH, Pforzheim, Germany), deliverable with a lightweight microcatheter, allowed a successful reduction of a looped microcatheter within an aneurysm.

Between January 2016 and December 2019, 335 brain aneurysms (ruptured and unruptured) were treated at our institution. Written informed consent for the procedure was obtained from all patients before they underwent the endovascular treatment.

In this retrospective study, the authors reviewed clinical, demographic, and procedural data of four patients (3 females and 1 male; age range 51-73) with a large or giant brain aneurysm treated with FDD, in which the described stent-retriever anchor technique was used. Intra-procedural complications were recorded, highlighting technique-related complications, namely vasospasm/injuries in the distal parent vessel or aneurysm bleeding. 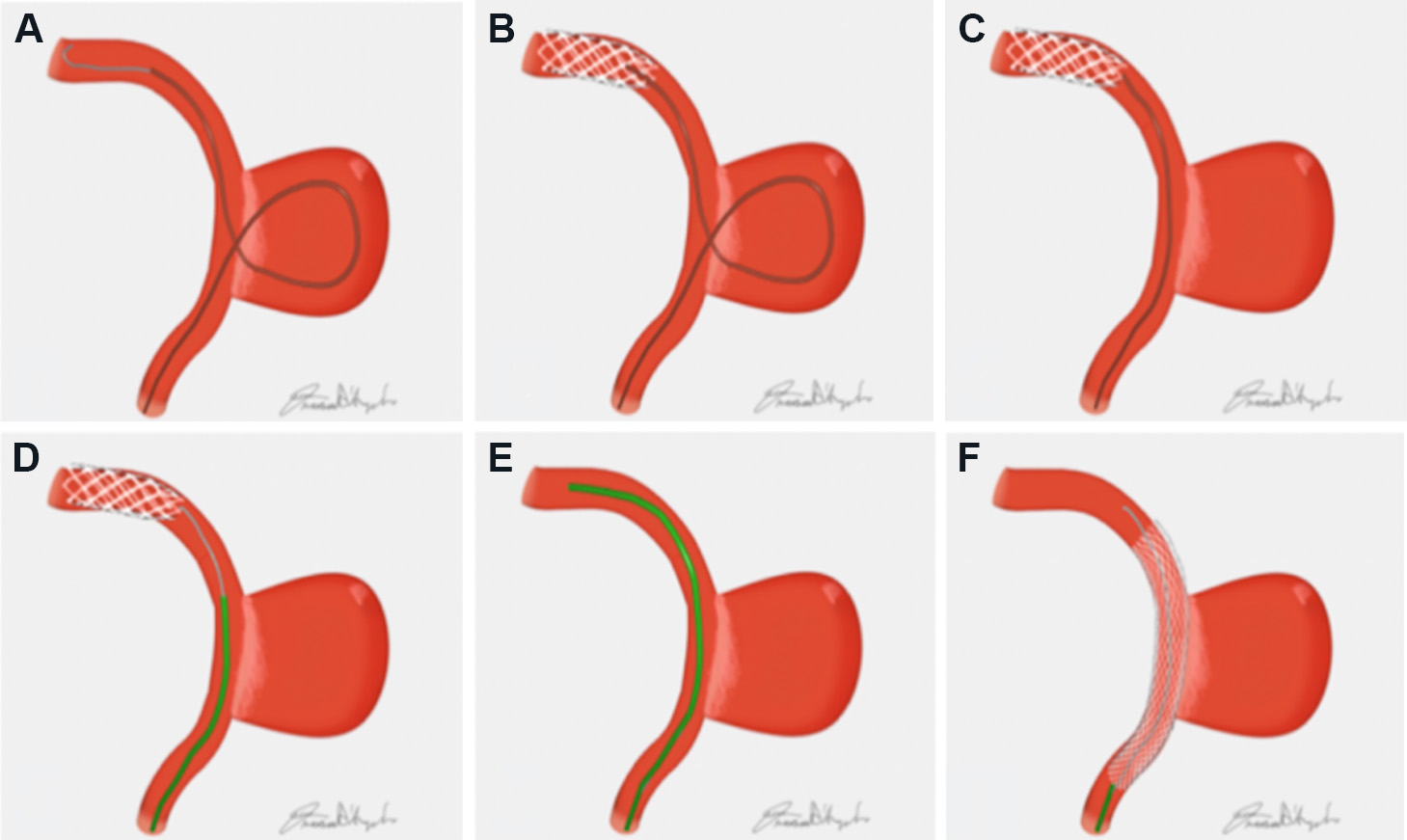 Three aneurysms were unruptured and one was previously ruptured [Table 1]. Two patients were asymptomatic (the aneurysm was an incidental discovery), one patient presented with a complete deficit of III c.n. [Figure 2], and one patient presented with SAH. The latter (Patient 4) was a giant aneurysm of the paraophthalmic segment of the left ICA that was first partially embolized with platinum coils; after the complete recover of the patient (3 months later), the treatment was completed by deploying a FDD. Three aneurysms belonged to the anterior circulation (paraophthalmic segment) and one to the posterior circulation (basilar tip). The average size of the aneurysms was 23 mm (range 15-34 mm) with a mean dome height/neck ratio of 1.9 (range 1.6-2.6).

Figure 2. A 52-year-old woman with a rapid onset of deficit of left III cranial nerve. Non-enhanced CT (A) and CT-angio images (B, C) showed a partially thrombosed giant aneurysm of the basilar tip. A frontal angiogram (D) better defined the anatomy of the aneurysm with an acute angulation between the basilar artery and the right PCA [distal landing zone for the flow diverter device (FDD)]. A 0.0165” microcatheter was navigated and looped inside the aneurysm to gain the right PCA (E). An Aperio stent retriever (3.5 mm ´ 28 mm) was fully deployed in the PCA and the microcatheter was removed (F). Over the pushing wire of the stent-retriever, the 0.027” microcatheter was delivered in the right PCA (G). The subtracted frontal image (H) showed the correct deployment of the FDD at the end of the procedure.

Dual antiplatelet therapy was started seven days before the procedure (ASA 100 mg and clopidogrel 75 mg) and was continued for 12 months. In all cases, a triaxial system was used to perform the procedure. In three cases, platinum coils were released in the aneurysm, using the “jailing” technique. No intra-procedural and post-procedural complications were recorded.

The treatment of large and giant wide-neck aneurysms remains a challenge for endovascular strategies[1]. FDD has radically changed the endovascular management of these aneurysms in terms of recanalization rate, morbidity, and mortality[2,3]. FDDs are a new generation stents characterized by a low porosity that allows them to achieve aneurysmal occlusion by reduction of the blood flow within the aneurysm and by the promotion of reendothelialization across the neck of the aneurysm.

Nevertheless, the reconstruction of the parent artery with the FDD can be technically difficult. Reaching the distal parent vessels of the aneurysm can be complicated by the unfavorable anatomy of the aneurysm, the acute angulation between the inflow and outflow vessels, or the presence of stenosis the distal parent artery. In such situations, the microcatheter needs to be looped inside the sac in order to overcome the aneurysm neck. This maneuver is particularly difficult to perform with a 0.027”/0.021” microcatheter, necessary for the deployment of FFDs, which are clearly stiffer than a 0.017”/0.0165” microcatheter[8].

Resolving the loop is thus mandatory to deploy the FDD. Attempting to straighten the loop by withdrawing the catheter will frequently result in prolapse of the microcatheter tip out of the distal vessel and into the aneurysm dome, due to a lack of adequate support within the distal vasculature[6]. Different anchor techniques can be used to straighten the microcatheter. Many techniques have previously been described to address this problem, such as the “balloon”, “stent”, “Solitaire”, and “sea anchor” techniques[4-7].

“Balloon technique” relies on the use of a balloon microcatheter, which is inflated distally to the aneurysm, in order to straighten the microcatheter; injuries of the distal artery access and thromboembolic complications could potentially occur during balloon inflation[4].

Edwards et al.[6] described one case of a large basilar tip aneurysm in which a detachable coil was advanced in the cerebral posterior artery and then used as an anchor for straightening of the looped microcatheter.

Fargen et al.[5] resolved the looped microcatheter using a partial retrievable stent as an anchor in the distal access.

Parry et al.[7] described the Solitaire (Medtronic) salvage technique, which allowed the successful reduction of the looped catheter within the aneurysm in three cases. In all cases, once the reduction maneuver was completed, the Solitaire was re-sheathed and the microcatheter was exchanged using an exchange microwire[7].

Based on the principle of the Solitaire technique, we present our salvage technique that relies on a new generation of low-profile stent-retriever (Aperio®, Acandis GmbH, Pforzheim, Germany), which can be delivered through a lightweight microcatheter (inner diameter 0.0165”/0.017”).

Quäschling et al.[8] recently described the safety and feasibility of this technique with another low-profile stent-retriever (pREset LITE, Phenox, Bochum, Germany) in a case series of 14 patients.

However, we assume that the greater length of the Aperio® stent-retriever compared to the pREset LITE® stent-retriever (30 mm vs. 20 mm) could theoretically guarantee a more stable distal anchorage during the several maneuvers. The anchor technique presents two additional advantages compared to the Solitaire salvage technique used by Parry et al.[7]. Firstly, the use of a smaller microcatheter allows an easier and safer intra-aneurismal navigation, reducing stress force on the aneurysm walls. Furthermore, with this technique, the 0.027” microcatheter is delivered over the pushing wire of the stent-retriever and an exchange wire is not required. The pushing wire of the Aperio® stent-retriever is insufficient for a traditional exchange maneuver (212 cm). However, the exchange of the microcatheter is possible by taking advantage of the stent radial force that anchors the stent itself into the vessel, avoiding its displacement during the removal of the 0.0165” microcatheter and the delivery of the 0.027” microcatheter in the outflow vessel over the pushing wire.

As previously reported, there may be concerns about placing a stent-retriever in a healthy artery which can cause dissection or vasospasm[7]. To prevent this possible complication, our suggestion is to position the stent in the M1 segment for the anterior circulation and the P2 segment for the posterior circulation, avoiding the deployment of the stent into more distal and smaller branches that are definitely more fragile. However, in our series, we did not record any artery injuries during the procedure or at the angiographic follow-up.

Treatment of large and giant brain aneurysms with flow diverter devices can be technically challenging, especially when distal access can be obtained only through aneurysm navigation[1]. In these situations, when standard maneuvers fail, a stent-retriever can be used as an anchor to permit straightening of the looped microcatheter and delivery of the 0.027” microcatheter over the pusher wire of the stent-retriever.

Although endovascular treatment of large and giant aneurysms with flow diverter can be technically difficult, the presented technique represents a useful and safe tool to maintain the distal access when looping of the microcatheter inside the aneurysm is necessary.

Contribute in conception and design of the study: Lozupone E, Pedicelli A

Contribute in writing and reviewing of the manuscript: Garignano G

The data of this paper are available on request at the corresponding author.

All authors declared that there are no conflict of interest.

Institutional review board approval was obtained for this retrospective study. Protocol ID 3583, approved on 5 November 2020 by ethical committee of fondazione policlinico universitario A.Gemelli IRCCS, Rome, Italy. All procedures performed were in accordance with the ethical standards of the institutional and/or national research committee and with the 1964 Helsinki Declaration and its later amendments or comparable ethical standards.

A written informed consent was obtained for all the patient. 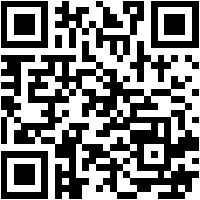