Coronary artery bypass grafting may involve substantial manipulation of the ascending aorta, including aortic cannulation, antegrade cardioplegia line cannulation, and aortic clamping. These distortions of the ascending aorta can lead to disruption of soft or calcified plaques in the aortic wall, which can cause embolization. A relationship has been shown between the degree of aortic manipulation and the degree of cerebral embolization. Thus, it is clear that the risk of cerebral embolization can be reduced by alterations in the surgical technique. Such surgical alterations can be guided by epiaortic ultrasound by assisting the surgeon in identifying regions where atherosclerosis is present to avoid or minimize the degree of aortic manipulation in these regions. By using a previously published examination protocol, the atherosclerotic regions can be found more efficiently with an ultrasound examination than manual palpation, and the entire examination can be completed within 3-5 min. This review aims to outline the current evidence to support the use of epiaortic ultrasound for myocardial surgical revascularization.

Conventional coronary bypass surgery involves significant manipulation of the ascending aorta. At a minimum, the aortic cannulation, antegrade cardioplegia line cannulation, and aortic clamping are significant distortions of the ascending aorta, which could disrupt soft or calcified plaques in the wall of the aorta and embolize their contents[1-4]. However, it is also common that additional aortic manipulation occurs with the construction of proximal aortic anastomoses for coronary grafting. This may be particularly extensive when a partial occlusion clamp is used. The opposite strategy is the complete avoidance of any manipulation of the ascending aorta by using a composite graft from the attached left or right internal mammary for inflow and circumvention of cardiopulmonary bypass with its associated cannulation and clamping[5-10].

WHAT IS THE ROLE OF ULTRASOUND OF THE AORTA?

There is a common misunderstanding of the role of epiaortic ultrasound examination. The notion that ultrasound alone directly leads to reduced cerebral or other end-organ embolization is not valid. After all, it is merely a diagnostic test that can identify the presence of atherosclerosis. To reduce embolization, the ultrasound must guide the surgeon to alter their surgical technique for avoiding or minimizing the degree of aortic manipulation in the regions where atherosclerosis is present.

Finally, it is important to realize that transesophageal echocardiography has a “blind spot” overlying the distal ascending aorta and proximal aortic arch, caused by the presence of air in the bronchus between the esophagus and the aorta preventing ultrasound transmission[18,19].

These sites are for aortic cannulation and aortic clamping, and consequently, adequate imaging of these sites is crucial. Essentially, the ascending aorta and proximal aortic arch can only be fully interrogated with ultrasound by using a handheld ultrasound probe.

ALTERATIONS IN THE SURGICAL TECHNIQUE

Unless novel coronary revascularisation techniques can be employed by the surgeon when required, there is often little value to epiaortic ultrasound. This is simply because all of the available space on the ascending aorta is used during a conventional aorta to coronary bypass graft operation. Consider the grafting orientation during conventional surgery:

For these various purposes, the entire ascending aorta is “allocated”, which means that if epiaortic ultrasound were to detect atherosclerosis, which could affect any of these sites, and then to avoid atherosclerosis, some alteration to the grafting or cannulation arrangement would be required. However, in that case, there is no option to significantly alter the position of any of the grafts, cannulation, or clamps, and the knowledge of aortic atherosclerosis being present is of little value.

Specifically, if there was atherosclerosis present at the site of the intended aortic cannulation, then logically, the surgeon should move that point of manipulation to a more proximal (or theoretically more distal) site. Alternatively, if the aortic cannulation site is satisfactory, but there was a large plaque present at the intended clamping site, the aortic clamp should be moved more proximally to an area free of atherosclerosis, and additionally, the antegrade cardioplegia catheter should also be moved more proximally to the clamp. This would not be possible if this segment of the ascending aorta was otherwise allocated for the construction of proximal aortic anastomoses but would only be possible if there were no aortic anastomoses. Thus, it would be possible only if a composite grafting technique was employed so that there were no proximal aortic anastomoses.

It follows that for the full benefit of epiaortic ultrasound of the aorta to be realized, flexibility of the technique employed by the surgeon is essential, even if the technique is only occasionally used. However, most surgeons are uncomfortable with techniques that they do not usually or otherwise routinely employ.

THE SURGEON’S FINGER VERSUS THE ULTRASOUND PROBE

Although the time needed to learn the technique, interpret the images, and conduct an epiaortic ultrasound examination is small, there is considerable reluctance to do so, which is perplexing[20]. One common view is that the surgeon’s “finger” is a very accurate assessment of aortic pathology, which, however, is far from true.

In general, imaging-based technologies are substantially superior to any form of manual palpation assessment in any form of medicine. Calcified aortic wall lesions offer more resistance to the finger’s pressure, which means that the aortic wall is less likely to be deformable by pressure exerted on it, leading to easier detection by the finger. Nevertheless, the lesions that are most likely to break off and embolize are those that are soft, have ruptured surface elements, or contain soft lipid-rich elements. The latter are particularly susceptible to dislodgement by aortic manipulation. These soft elements are almost impossible to detect with the finger when pressure is applied to the sidewall of the aorta as they offer no counter-resistance to the pressure. Therefore, the absence of counter-pressure would be interpreted by the surgeon as being “safe”, yet this may reflect the opposite, a greater likelihood of embolization. Several studies have been performed comparing the efficacy of manual examination and ultrasound examination. Our group previously showed that manual palpation was only able to detect 50% of important atheroma compared with epiaortic ultrasound[20]. Similarly, Sylivris et al.[21] found manual palpation to be very insensitive, detecting only 2 out of 36 segments of important atheroma in the ascending aorta. Both studies also indicated that transesophageal echocardiography was even less sensitive than manual palpation. Despite this, transesophageal echocardiography has been recommended as a screening tool for atheroma detection[22,23]. Importantly, however, the frequency of adequate imaging of the aortic zones 5-6 (distal aortic arch and descending aorta), Figure 1, is generally higher with transesophageal echocardiography than with epiaortic ultrasound. Still, as previously shown, a transesophageal echocardiographic inspection of zones 5 and 6 has a very high negative predictive value for atheroma in zones 1-4 (ascending aorta and proximal aortic arch). In contrast, it has a very low positive predictive value[20,23]. Atheroma is more frequent in older patients[24], which suggests that epiaortic ultrasound is of greater importance in older patients with moderate/severe atheroma in zones 5 and 6. In contrast, its yield may be low in young patients with only nil/mild atheroma detected in these zones by transesophageal echocardiography. Thus transesophageal echocardiography and epiaortic ultrasound should be used as tools to complement each other rather than as alternatives. 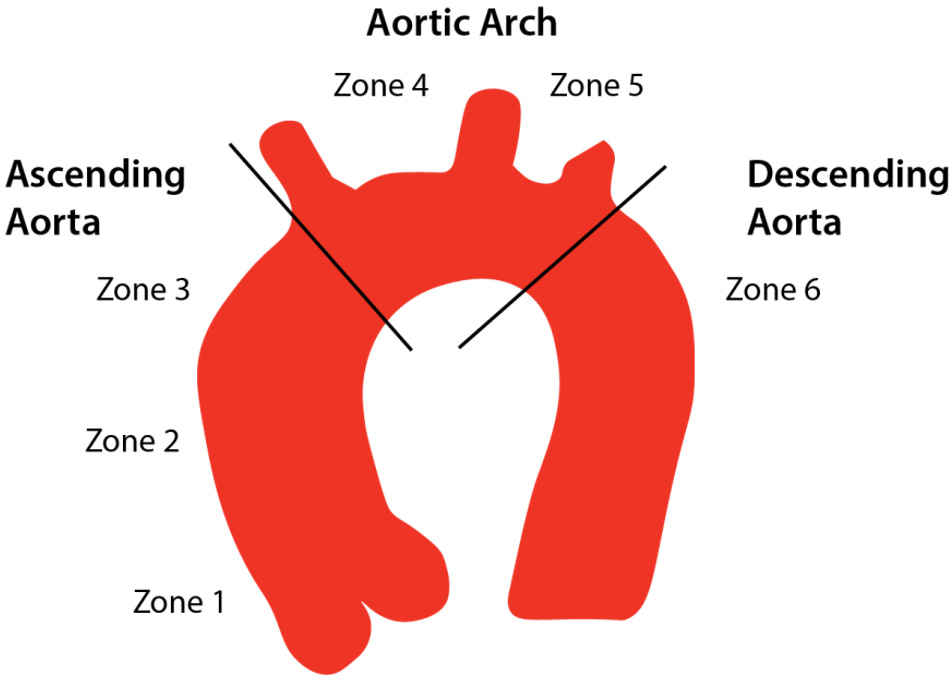 BARRIERS TO THE ADOPTION OF ROUTINE EPIAORTIC ULTRASOUND

The belief that manual palpation is more accurate.

Lack of familiarity with the use of ultrasound technologies and concern about not being “trained” in its use.

A disregard of the literature demonstrating a causal link between aortic manipulation and systemic or cerebral embolization.

Personal fear of not being considered to be the “expert” in the operating room.

Personal reluctance to consider alternative revascularization techniques that are not part of the surgeon’s routine practice, such as reliance on composite grafting, sequential grafting, or use of multiple arterial grafting techniques.

The examination is conducted on a superficial structure, generally, less than 5 cm in diameter, and therefore the higher the frequency of the probe, the better the resolution will be. Additionally, the probe needs to be used within a sterile field. Ideally, the probe itself is sterilized, but generally, use of the probe within a sterile plastic barrier sheath is undertaken. Either works well, provided there is a good acoustic couple between the tissue and the probe, which requires the use of sterile acoustic gel.

The recommended sequence of interrogation, Figure 2 is firstly to image the aortic valve in the long axis, which overlies the origin of the right coronary artery. Then the probe can be rotated 90° to follow the right coronary artery in short axis, along the atrioventricular groove as far as the acute margin of the heart. Then the probe can be orientated in a sagittal plane between the aorta and the pulmonary artery to image the left main coronary artery as well as the proximal left descending and circumflex artery. The probe is then rotated 90° to the ascending aorta, and the proximal, mid, and distal ascending parts of the aorta are imaged, ensuring that the probe is at 90° to the aorta at each site. If the aorta is enlarged, the probe is moved accordingly to image all of the aorta and can be used to image the aorta in the long axis, if required. Lastly, the probe is rotated 45° to image the aortic arch in the long axis, and by angling superiorly, the cerebral vessels can be imaged as well. The same technique can be used for a number of other alternative ad hoc uses, such as imaging grafts, anastomoses, and other structures such as the interatrial septum. Generally, in the hands of an expert, the entire examination is completed within 3-5 min, and thus, there is no meaningful delay in the conduct of the surgery. 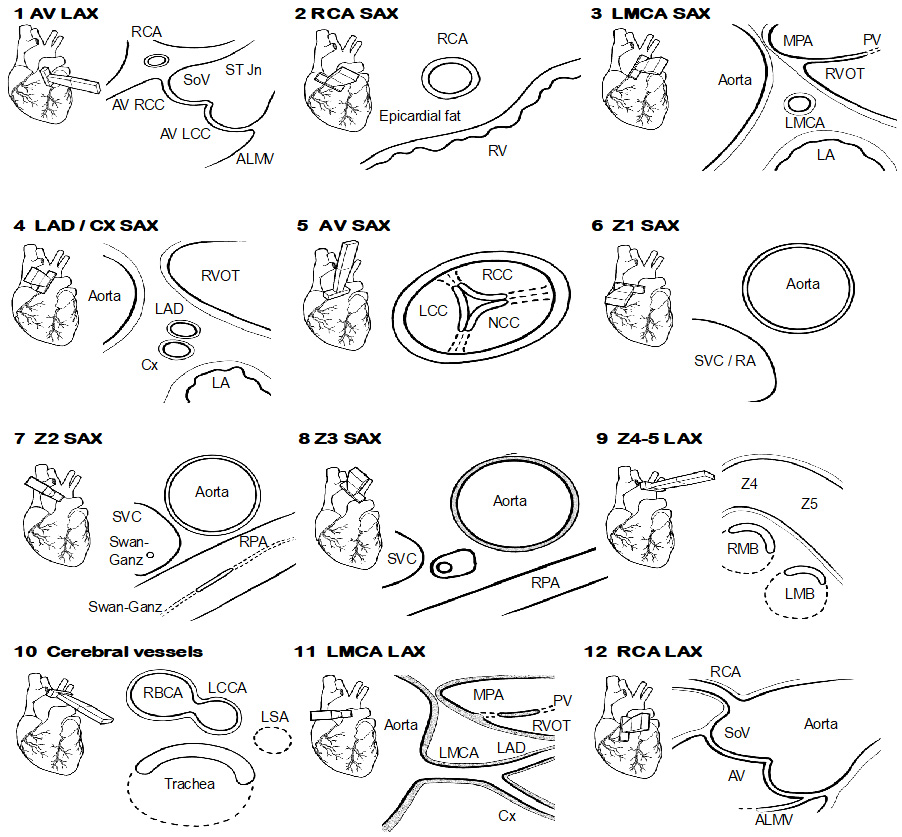 Epiaortic ultrasound is superior to manual palpation in the assessment of aortic atheroma, which may reduce the risk of plaque embolization substantially during conventional coronary artery bypass grafting. Generally, the performance of epiaortic ultrasound examination is simple, and an examination can be completed within a few minutes. Even though several studies have reported higher efficacies of epiaortic ultrasound compared with manual palpation and transesophageal echocardiography, trials remain warranted to compare the risk of systemic or cerebral embolization and clinical outcomes.

Made substantial contributions to conception and design of the commentary and performed data interpretation: Royse A, Heiberg J, Royse C 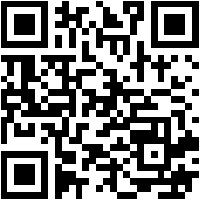