Photo-theranostics is a therapeutic and diagnostic approach that uses photosensibilization[1]. This approach makes part of the medicine of the future-subcellular therapy, including at the level of mitochondria[2]. Photo-theranostics targets cells and tissues that are affected by pathological changes inducing apoptotic cell death. However, the approach allows targeting cellular organelles, if the photo-sensitizing agent is accumulated selectively. Such selectivity can result from the organelle’s functional state, as in the case of mitochondria affected by mitochondrial genome abnormalities. Currently, subcellular therapy is being developed mainly for cancer cells, but we believe that such approaches are applicable to cardiology, in particular, for atherosclerotic diseases. For instance, some pro-atherogenic mitochondrial DNA mutations associated with atherosclerosis can lead to mitochondrial dysfunction[3].

Some photo-sensitizing agents accumulate selectively in mitochondria making the photodynamic targeting efficient enough. Thus, protoporfyrine IX (PpIX), which is widely used in clinical practice, is produced from a prodrug 5-aminolevulinic acid (5-ALA) in course of heme synthesis cascade in the mitochondria. Exogenous 5-ALA causes excessive formation of PpIX, which cannot be efficiently processed by ferrochelatase and accumulates in the cells. PpIX accumulation directly depends on the cell’s metabolic activity.

We found that PpIX accumulation varied significantly from cell to cell within cell populations. Cybrid lines had increased PpIX accumulation in comparison with native THP-1 macrophage lines. A positive correlation between PpIX and mitochondrial potential was observed [Figure 1]. 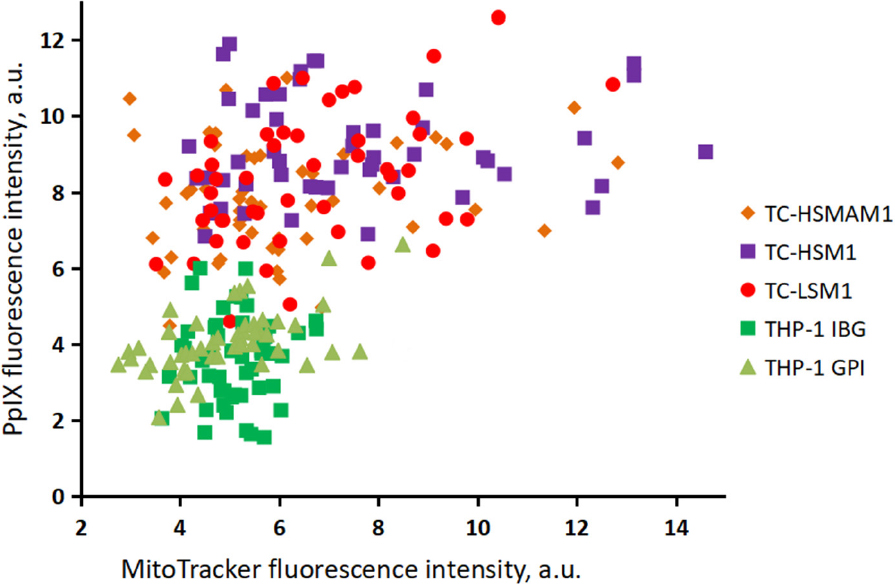 It can be assumed that selective elimination of dysfunctional (mutated) mitochondria can be achieved by adjusting laser intensity sufficient to induce photodynamic destruction of the organelles, while active (normal) mitochondria and the cells as a whole should be preserved at the used intensities.

Photodynamic therapy is a non-invasive treatment method in oncology, dermatology and infectious diseases. The disadvantage of this approach is the low depth of penetration into the tissue of excitation light and insufficient accumulation of photosensitizers in subcellular organelles. On the other hand, subcellular organelles, and in particular mitochondria, are promising therapeutic targets for effective therapy. At the same time, targeting mitochondria approaches do not necessarily have to be associated with the use of laser. It can be assumed that substances accumulating in mitochondria as a result of metabolic disturbances themselves without a laser will contribute to the death of dysfunctional mitochondria if there is an intra-mitochondrial overload of such substances. In addition to 5-ALA, there are many other mitochondria targeting substances. This is a good arsenal for a broad search for potential drugs for subcellular therapy including anti-atherosclerotic therapy[4,5].