2Department of Personalized Therapy and Nutrition, , .

This article belongs to the Special Issue Lipoproteins and Other Pathogenic Factors of Atherosclerosis
Views:2678 | Downloads:248 | Cited:

Results: The children were divided into three groups depending on the type of GSD. Nineteen children (31%) had type I GSD (Group 1), 16 (26%) - type III (Group 2) and 27 (43%) - types VI and IX (Group 3). Dyslipidemia of varying severity was more specific to patients with type I and III GSD. Higher levels of triglycerides were associated with type I GSD, while higher levels of LDL cholesterol were common to type III GSD (P < 0.05) No changes in the lipid profile were observed in 18 (29%): one with type I, 4 with type III, and 13 with types VI and IX.

Conclusion: Lipid metabolism disorders were detected in 71% of children with GSD, especially with types I and III. The elevated levels of total cholesterol and LDL cholesterol are associated with the early progression of atherosclerosis and an increased cardiovascular risk in the general population. But there is a lack of evidence of a link between lipid metabolism disorders detected in childhood and an increased risk of cardiovascular diseases in patients with GSDs. More studies needed to investigate this issue.

Glycogen storage disease (GSD, glycogenosis, dextrinosis) is a common term for a group of hereditary metabolic disorders associated with impaired glycogen metabolism. The prevalence of GSD varies from one case per 20,000 to 300,000 births depending on the type of disease[1].

The major part of GSDs has an autosomal recessive inheritance (e.g., type IX is X-linked recessive disorder) and implemented through specific enzyme deficiencies. Furthermore, some cases of simultaneous several enzymes failure have been described. Defects in synthesis enzymes, as well as glycogen utilization enzymes, can be observed depending on the GSD type. Genetic disturbances of glycogen metabolism lead to the accumulation of normal and/or pathologically changed glycogen in internal organs and tissues. The liver, heart, skeletal muscles and blood cells are affected in GSD I (von Gierke disease), III (Cori or Forbes disease), VI (Hers disease), VII (Tarui disease), VIII and IX types[2]. The pronounced metabolic changes cause growth and developmental delay at an early age[2].

The cardiac pathology in GSDs especially in type II (Pompe disease) is well studied[3]. Among other types, the most common cardiovascular (CV) disorders are found in children with type III GSD. Myocardial involvement in GSD is performed by left ventricular hypertrophy, less frequently cardiomegaly, or isolated right ventricular hypertrophy and, in rare cases, life-threatening arrhythmia and hypertrophic cardiomyopathy as non-compact ventricular myocardium[4]. Pulmonary arterial hypertension is another CV complication of GSD[5,6].

The crucial mechanism of CV complications in GSD is dyslipidemia. GSD-associated lipid disorders indicate close interactions between the metabolism of carbohydrates and lipids in these patients[7]. In case of such severe metabolic disorders as GSDs, especially types I and III, affect lipid metabolism in early childhood.

According to the Rake study, hypercholesterolemia and hypertriglyceridemia are more common in type I GSD, particularly subtype Ia[8]. Furthermore, pancreatitis and cholelithiasis are prevalent complications of hyperlipidemia in GSD. Moreover, these patients characterised by the higher relationship of high triglyceride levels (> 5.6 mmol/L) with hepatic adenoma development[9].

Hypertriglyceridemia in GSD type I occurs as a result of a number of reasons. First, a violation of gluconeogenesis leads to the accumulation of fatty acid precursors, from which triglycerides are subsequently synthesized. Secondly, a decreased lipoprotein lipase activity causes disturbances in physiological lipolysis and a decrease in the clearance of triglycerides. In addition, the conditions described above can be exacerbated by a chronically low level of insulin, which normally inhibits the synthesis of triglyceride-rich particles in the liver[10,11]. Finally, a fatty liver is a common condition in patients with GSD I as a consequence of excess fatty acid transport from the adipose tissue to the liver and increased lipogenesis de novo[12]. Increased cholesterol synthesis in combination with disturbances of lipoprotein and triglyceride elimination leads to severe hypercholesterolemia and hypertriglyceridemia in patients with GSD I[13,14].

In GSD III, hypertriglyceridemia is detected in 67% of patients, while only one-third demonstrates hypercholesterolemia. In general, lipid disorders are not as common comparing to GSD I[15].

The impact of oxidized lipoproteins on atherogenesis is well known[16]. The role of oxidative stress and total antioxidant protection in patients with GSD I was examined in a number of studies. In one study, total reactive antioxidant potential was compared between children with GSD, diabetes, and familial hypercholesterolemia. This biomarker was much higher among GSD patients[17].

Some studies demonstrated the development of premature atherosclerosis and an increased risk of CV complications associated with GSD[18,19], whereas others did not reveal the association of GSD with premature atherosclerosis[1,20]. Moreover, it was found that LDL-cholesterol particles are paradoxically more resistant to oxidative stress in patients with GSD I compared to the control group[21].

A series of studies show the connection between high cholesterol levels in children and adolescents in the general population and the risk of atherosclerosis and CV complications in adult life[22]. However, despite the fact of the existence of dyslipidemia in GSD has been known for several decades, the need for medical treatment of lipid disorders in GSD is still disputable.

Fibrates, statins, niacin, bile acid sequestrants, ezetimibe, lomitapide, phytosterols, fish oil, etc. are currently used to correct lipid disorders in adults. The issue of prescribing these medicines to children remains controversial. Apparently, lipid-lowering therapy should be prescribed if there are strict indications, when diet therapy does not eliminate high levels of blood lipids, threatening the development of acute pancreatitis or atherothrombotic complications[23].

Thus, the aim of our study was to determine lipid profile patterns in children with different types of glycogen storage disease.

The study was conducted in agreement with the Declaration of Helsinki, GCP. The special approval from the Independent Local Board of Ethics Committee was received.

The children were divided into three groups depending on the type of GSD. Nineteen children (31%) had type I GSD (Group 1), 16 (26%) - type III (Group 2) and 27 (43%) - types VI and IX (Group 3). The groups were comparable in age. In the group of children with type VI and IX GSD, boys prevailed, since the vast majority of patients had type IX GSD, which is characterized by the X-linked pattern.

Lipid profile disorders were detected in 44 (71%) of 62 children. Dyslipidemia of varying severity was more specific to patients with type I and III GSD. Higher levels of triglycerides were associated with type I GSD, while higher levels of LDL cholesterol were common to type III GSD (P < 0.05) [Table 1]. No changes in the lipid profile were observed in 18 (29%): one with type I, 4 with type III, and 13 with types VI-IX. 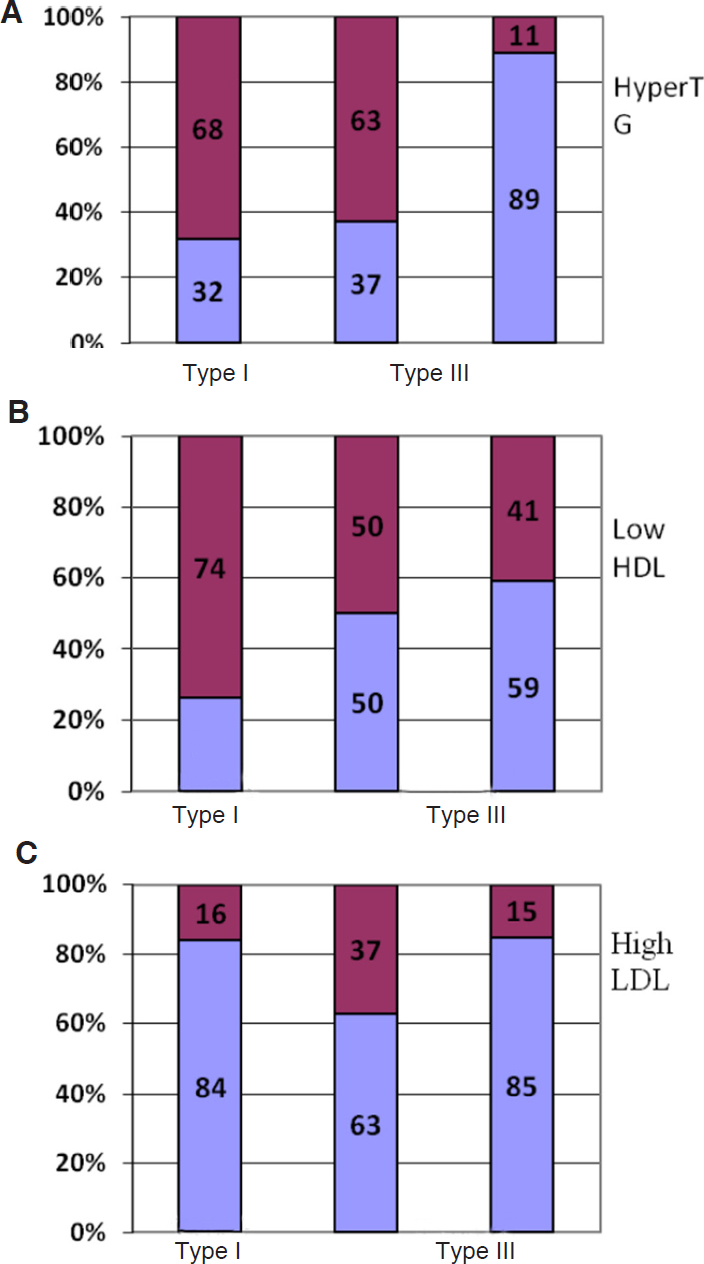 The elevated levels of total cholesterol and LDL cholesterol are closely associated with the early progression of atherosclerosis and an increased cardiovascular risk in the general population. At the same time, there is still no clear position on hypertriglyceridemia as a risk factor for cardiovascular diseases[24].

According to some studies hypertriglyceridemia can be associated with atherogenesis, firstly, as a marker of some metabolic disorders, secondly, because of the vascular wall macrophages infiltration due to oxidised triglyceride-rich lipoproteins receptor activation[11]. There is evidence that elevated triglycerides lead to hypercoagulation through stimulation of a plasminogen tissue activator inhibitor, an increase in the content of VII coagulation factor, and the activation of the transition of prothrombin to thrombin[24]. The Hokanson and Austin meta-analysis of prospective studies established that triglyceride levels of up to 5 mmol/L (450 mg/dL) predicted the risk of coronary heart disease (CHD), especially in women. Thus, in the Framingham study, the risk of CHD positively correlated with triglycerides levels[25].

According to the Copenhagen Male Study covering 2,906 men aged 52-74 years without CHD, the first myocardial infarction occurred in 229 of them in 8 years of follow-up and the risk of developing CHD increased as the initial triglyceride levels increased[26]. A meta-analysis of clinical trials with a total of 46,413 men and 10,864 women examined by Hokanson and Austin showed that triglycerides are an independent risk factor for CHD even after adjusting for HDL cholesterol values[26].

There is currently no convincing evidence of a link between lipid metabolism disorders detected in childhood and an increased risk of cardiovascular diseases in patients with GSDs. More studies needed to investigate this issue.

Authors confirm that the data were strictly obtained from medical records according to the privacy policy and ethics code of our institute.

The study received an approval from the Local Ethic Committee (0529-2016-0007), as it was conducted as a part of the State Program of Basic Research. All procedures were done with accordance to GCP standards and Informed consents from parents or official representatives were received prior to any research procedures. 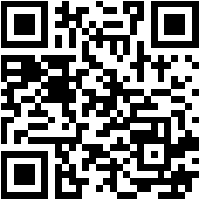