Most of axillo-subclavian artery injuries are due to violence. Iatrogenic injuries to such vessels are relatively rare. We hereby present the first report of pigtail catheter insertion for right upper chest wall hematoma drainage resulting in penetration of axillary artery and pseudoaneurysm formation. A 39-year-old male victim of motor vehicle accident developed right upper chest wall hematoma after initial conservative treatment. Subsequent admission was arranged and pigtail catheter drainage was performed under sonography guidance. The procedure caused penetrating injury to his right axillary artery with pseudoaneurysm formation. Endovascular repair and stent placement were performed. The patient was discharged within 2 weeks without significant sequelae. Non-catheterization procedure caused penetration of axillary artery was rarely seen in published reports. Our report described a case of axillary artery penetration resulted by pigtail catheter insertion which was never seen. We wish to emphasize on the jeopardy of non-vascular procedure on penetrating nearby vessels because of anatomical proximity.

Thoracic cage and shoulder girdle provide a well protection of the proximate major vessels. Therefore, injuries to such vessels which are adjacent to thoracic inlet, including axillo-subclavian artery are fairly rare[1]. On the other hand, the well protection of these vessels by local anatomy also posed a challenge for surgeons to approach them during open surgery. The rareness of such cases further increases the risk of open operation of axillo-subclavian vessel repair due to inexperience of even senior cardiovascular surgeons. Stab and gunshots are among the majority of mechanism causing injuries to axillo-subclavian artery[2]. Iatrogenic injuries are relatively minor in proportion[3]. Overall mortality of patients with axillo-subclavian artery injury who survived initial insult and reached the medical institutes receiving operation range from 5% to 30%[4-6]. As a result, a growing trend of endovascular procedure for repairing injuries to axillo-subclavian artery appears in recent years[3]. We herein present a case of penetrating injury to the right axillary artery resulted by pigtail catheter insertion. The patient was successfully treated with endovascular repair and discharged within 2 weeks without significant sequelae.

A 39-year-old male patient, victim of a motor vehicle accident, was admitted to our satellite hospital. Right 1st and 3rd -8th ribs fracture, minimal pneumothorax and right pleural effusion were diagnosed by chest computed tomograms (CT). Right upper chest wall hematoma was found in subsequent out-patient clinic follow up with CXR. He was then admitted, and thoracocentesis under sonography guidance was done. Grossly, the drainage fluid was bloody, which was suspected to be the result of musculoskeletal hemorrhage. Progressive chest pain with expansion of chest wall ecchymosis developed after driange, and therefore a pigtail catheter with 12Fr. in diameter was inserted for drainage over right upper chest wall [Figure 1]. Nonetheless, the drainage amount was minimal and it was considered as a failure because the amount of pleural effusion remained unchanged on chest X-ray. The pigtail catheter was removed within 3 days of placement. However, upon removal, the doctors encountered major bleeding, up to 2000 cc. Emergent CT scan was done right after the incidence which illustrated contrast extravasation trace from right axillary artery leading to the tract of the previous inserted pigtail catheter, and the formation of a chest wall pseudoaneurysm [Figure 2]. General surgeons tried to approach the bleeder with open surgery but failed. The patient was then transferred to our hospital. 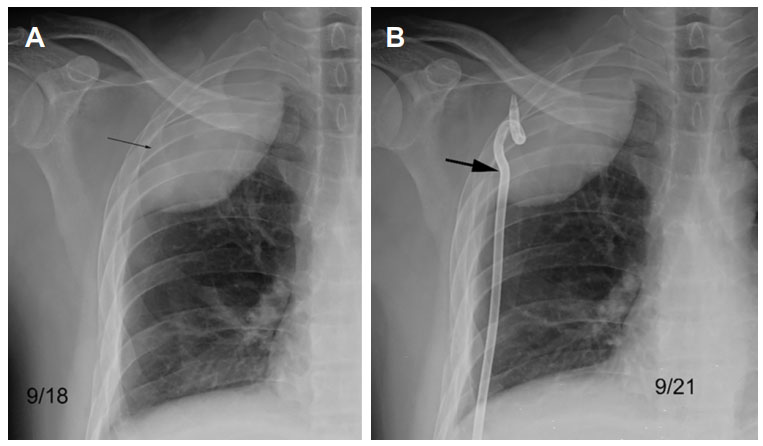 Figure 1. (A) Chest X-ray image reveals a huge hematoma or haemothorax shadow which crosses as many as 4 intercostal spaces. (B) The arrow points out the insertion site of the pigtail tube, which is very close to axillary artery 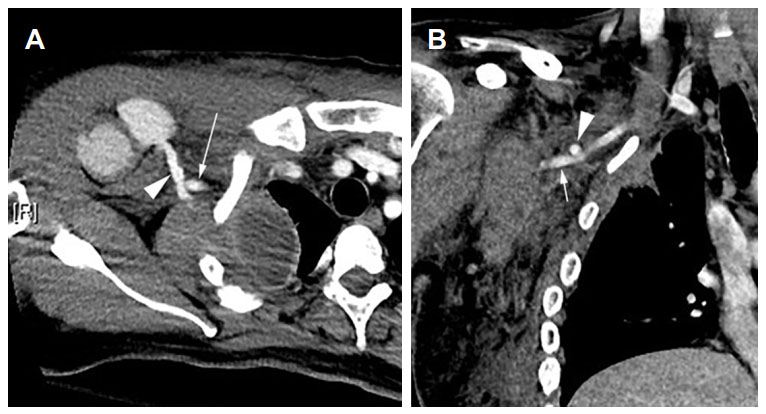 Figure 2. (A) Contrast-enhanced chest CT axial view reveals the penetrated axillary artery (arrow) and a track (arrowhead) tracing to the pseudoaneurysm. (B) Coronal view of the same lesion

Right on transferal, emergent endovascular repair was scheduled, and an extravasation of contrast media was detected on right axillary artery intra-operatively. A cover stent (GORE® VIABAHN® Endoprosthesis, W.L. Gore and Associates, Inc. Flagstaff, AZ) with 8 mm in diameter and 5 cm in length was implanted through right brachial artery to facilitate arterial repair. Postdilatation was done with Rival 8 mm balloon. The pseudoanerysm was debrided after the endovascular procedure [Figures 3 and 4]. The patient was discharged uneventfully within 2 weeks. 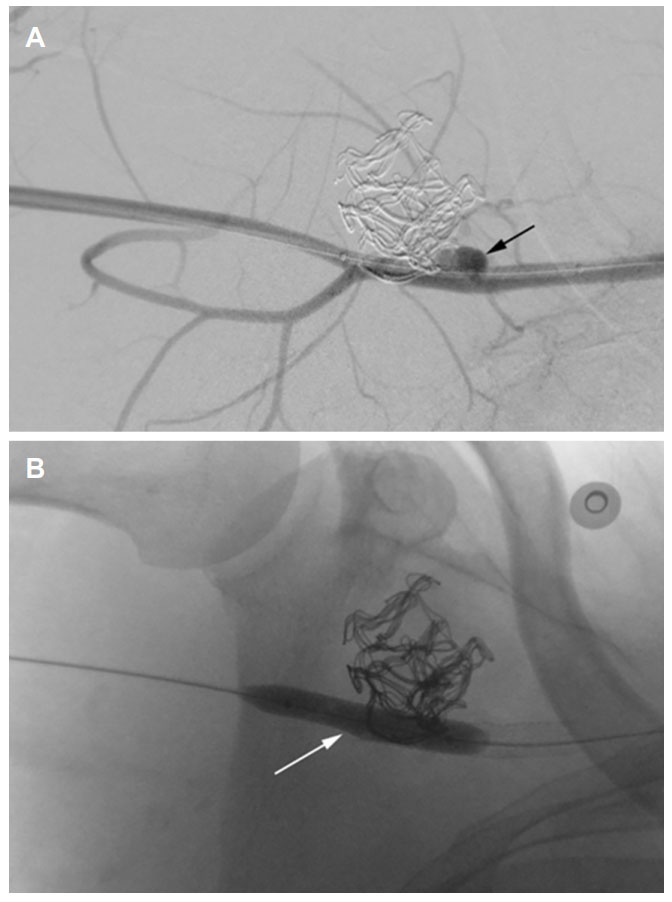 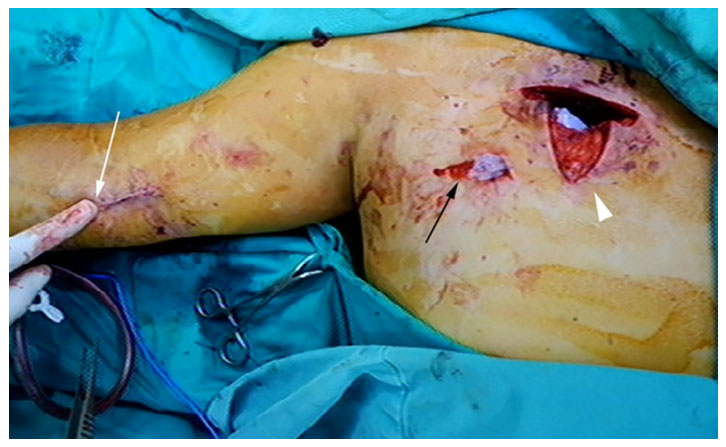 Figure 4. The wound of the patient. The white arrow points out the approach site of endovascular procedure which is the brachial artery near elbow. The black arrow is the insertion site of the pigtail tube while the white arrowhead points out the wound created by the surgeon at our satellite hospital in attempt to approach the bleeder

Our case was rare, and there was no similar report in previous publication. It was a case of penetrating injury to axillary artery by pigtail catheter insertion for chest wall hematoma. Pseudoaneurysm formation was revealed with subsequent CT and angiogram evaluation. For injuries to the axillo-subclavian artery, there were various kinds of endoprosthesis useful for repair. For the subgroup of penetrating injuries or iatrogenic injuries to axillo-subclavian artery, there were very few cases repaired by endoprosthesis (GORE® VIABAHN® Endoprosthesis, W.L. Gore and Associates, Inc. Flagstaff, AZ) that we chose for our patient[3,8,14,15].

Based on what was mentioned above, we wish to deliver a few messages. First of all, there is a potential risk of non-vascular procedure in causing axillary artery penetrating injury. In trauma such as our case, the site of hematoma was at upper chest which was very close to axillo-subclavian artery anatomically. When approaching the lesion with percutaneous procedures such as pigtail catheter drainage, penetrating injury could happen.

Drafted the manuscript, and collected the proper images: Kao CC

Conceived of the study and helped to proofreading the draft: Huang YK

Read and approved the final manuscript: both authors

The data in the study was collected from the medical record of the patient in Chiayi Chang Gung Memorial Hospital. The patient has agreed to provide his data for study.

All authors declare that there are no conflicts of interest.

The patient has agreed to provide his data for study.

Written informed consent was delivered to the patient and was signed by the patient himself. The patient was well explained and was aware of the publication of this case report and any accompanying images.