There is an increasing number of patients who have surgery during the active phase of infective endocarditis. Despite the decreasing in-hospital mortality and increasing early intervention rate, optimal timing for surgery remains a difficult decision. For patients with mental illnesses, the choice of valve is another factor to consider as non-adherence may lead to serious adverse events Antipsychotic medications may also alter the metabolism of vitamin K antagonists increasing the risk of stroke or major haemorrhage. We report a case of a 19-year-old man with a history of Ehlers-Danlos syndrome and aortic regurgitation, who required management of aortic valve bacterial endocarditis. This is the first report describing the use of the new RESILIA INSPIRIS valve which has increased durability and does not require anticoagulation.

Infective endocarditis is inflammation of the endocardium, usually of the valves, usually by bacterial infections. Indications for surgery include symptomatic heart failure, uncontrollable infection, embolic events, large vegetations, severe valvular and perivalvular lesions and infections by virulent microorganisms[1]. Risk factors include structural abnormalities of the cardiac valve which alter flow dynamics (connective tissue disorders, prosthetic valves) for adherence of bacteria. This allows adhesion of bacteria to the valvular surface and propagates as vegetation or systemic emboli[1].

We report a case of a 19-year-old man who was referred to the valvular multidisciplinary team (MDT) meeting. He was an inpatient in the coronary care unit for 2 weeks with a background of cardiac-valvular Ehlers-Danlos syndrome (cvEDS) with severe aortic regurgitation. His other comorbidities included Asperger’s syndrome, borderline autism, psychotic depression and asthma. His regular medications included aripiprazole, fluoxetine, and bronchodilators. He had multiple admissions to psychiatric services due to non-adherence to medications.

He presented to the general surgeons with increasing abdominal pain, vomiting and raised inflammatory markers. There were no subcutaneous stigmata of infective endocarditis but a collapsing pulse was present on examination. A computed tomography scan showed embolic infarcts in the spleen [Figure 1] and blood cultures were positive for Streptococcus mutans. 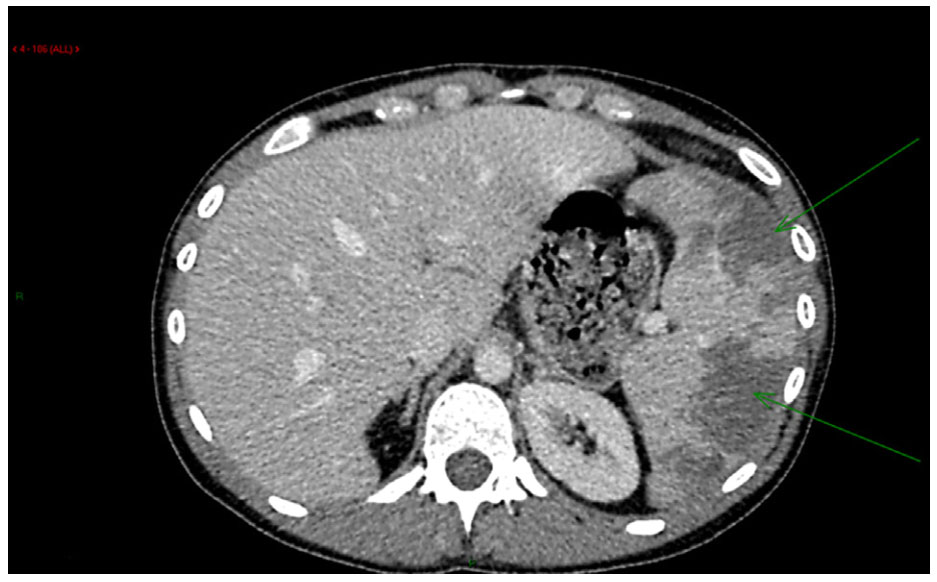 Figure 1. Computed tomography showing a pyramidal wedge of affected splenic tissue with the apex pointing towards the hilum, and the base on the splenic capsule with areas of heterogenous enhancement

He later developed cellulitis of his right foot in keeping with a septic embolism. A transthoracic echocardiography showed a large vegetation on the non-coronary cusp (NCC) of the aortic valve with no other valvular abnormalities and a preserved ventricular function. A subsequent trans-oesophageal echocardiograph revealed a 1.3 cm × 1.05 cm vegetation on the NCC with a perforation of the NCC and severe aortic regurgitation with two jets. The mitral valve was clean with no evidence of tricuspid valve regurgitation nor pulmonary valve insufficiency and there was no aortic root dilatation. His electrocardiogram incidentally was normal [Figure 2]. 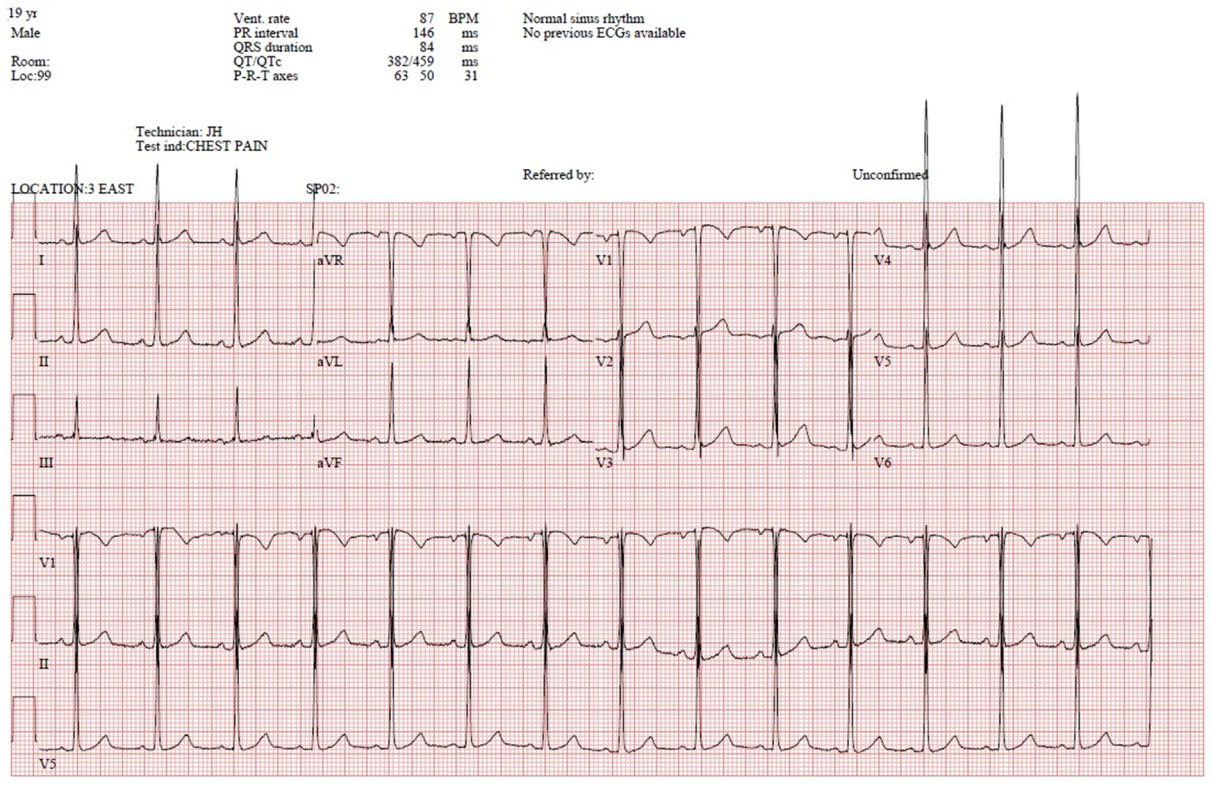 He received intravenous benzylpenicillin, clindamycin and gentamicin resulting in a C-reactive protein reduction from 134 to 26 mg/L. His dental checks were satisfactory at the time of referral. Due to the patient’s comorbidities and previous history of non-adherence, there were concerns about the use of anticoagulation in the setting of a mechanic valve implantation. Therefore, the MDT outcome favoured the use of a bio-prosthetic valve. The INSPIRIS RESILIA Aortic ValveTM (Edwards Lifesciences, One Edwards Way, Irvine CA 92614 USA) was chosen partly due to the young age of the patient.

A median sternotomy was performed. The patient was cooled to 32 ℃. Hockey stick aortotomy was done to access the native aortic valve. Cardioplegia was administered into the coronaries. On inspection, there was a large perforation on the non-coronary leaflet. The annulus was sized to 27 mm. The INSPIRIS RESILIA valve (model no. 11500A) was inserted using pledgetedTi-Cron (Ti-Cron™, Covidien 555 Long Wharf Drive New Haven, CT 06511) mattress sutures. A GoretexTM (© 2012 W. L. Gore & Associates) patch was applied between the pulmonary artery and aorta as a wrap. The pericardium was closed using a Goretex patch. The patient was weaned off bypass without difficulty. The total ischaemic time was 91 min with a bypass time of 110 min. An intraoperative transoesophageal echocardiography revealed a well-seated valve with no paravalvular leak.

He was extubated within 6 h of arrival to the intensive care unit, discharged to the high dependency unit on post-operative day 1 and to the ward the following day. A peripherally inserted central catheter line was inserted for subsequent doses of IV antibiotics post-operatively [Figure 3]. He was discharged home with the remainder of his antibiotic course administered as an outpatient on the 9th post-operative day. He attended the follow-up cardiology clinic with well-healed wounds and a transthoracic echocardiography revealed a well-seated valve with no regurgitant flow. 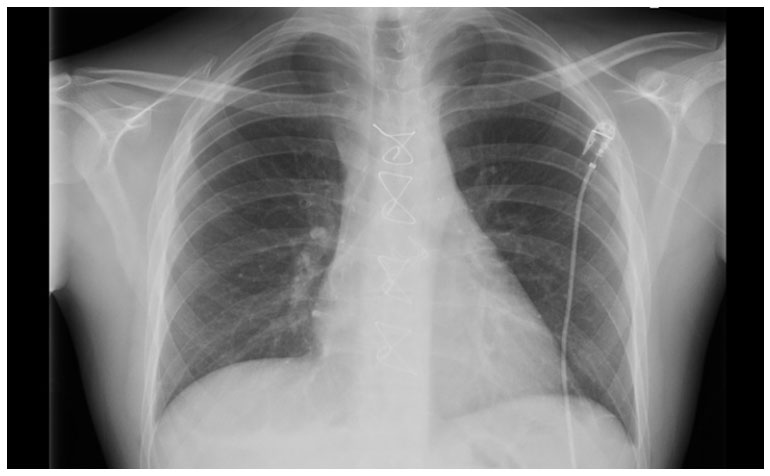 Bio-prosthetic tissue valves are advantageous due to the lower frequency of thromboembolism thereby avoiding long-term anticoagulation. Long-term durability, however, limits its usage in younger patients. Calcification of these valves causes structural valve degeneration. The type of bio-prosthetic tissue used also influences the rate of calcification. Liao et al.[2] proved in rat models that bovine pericardium valves calcified less than porcine valves. This, however, did not have any effect on long-term survival. Most bio-prosthetic valves are fixed in glutaraldehyde to prevent early degeneration after implantation. This process in itself can cause in-vivo calcification of tissue. Various fixation tissue treatments have been developed to circumvent this effect. Carpentier et al.[3] proved that the rate of calcification could be reduced by decreasing the phosphate content or by blocking calcification binding sites with magnesium ions and using surfactant. The enhancement of such properties may facilitate the use of tissue valves in younger patients. In one particular single center experience utilizing the ResiliaTM technology, revealed excellent haemodynamic per­formance and safety outcomes at one year of follow-up with a paravalvular leak rate of < 1% at one year and no reduction in effective orifice area[4]. Flameng et al.[5] looked at the anti-calcification efficacy of using a novel method of treatment vs. standard anti-calcification in juvenile sheep. The novel technology involved:

2. Glycerolization with additional ethanol rinsing to reduce the residual chemicals and allowing the valves to be packed dry as the glycerol and ethanol mixture displaces most of the water;

3. Sterilisation with ethylene oxide, thus valves need not be rinsed prior to usage.

In this randomized study, the valves were placed in the mitral position. The sheep with the novel preservation had a lower mean gradient across the valve and less leaflet calcification. They concluded that the novel preservation significantly improved the hemodynamic and anti-calcification properties compared to current standard of care. This novel treatment led to the development of the INSPIRIS RESILIA valve. In its recently published safety and efficacy trial (COMMENCE 2), the INSPIRIS RESILIA valve showed improved breathlessness, increased effective orifice area, reduced mean gradient and low paravalvular leak rate at two years. One-year actuarial freedom from all-cause mortality for all patients was 97.6%[6].

Our patient also has a long history of non-adherence to medication. This was taken into consideration prior to deciding the choice of the valve to use. Retrospective analysis of the Veterans AffaiRs Study to Improve Anticoagulation Registry demonstrated that patients with mental health conditions had a lower time in therapeutic ratio after adjusting for other covariates[7]. Mechanical heart valves also have an audible click which has been shown to affect a patient’s health-related quality of life raising the likelihood of non-adherence[8].

Ehler-Danlos syndrome is a genetic defect of collagen and connective tissue synthesis and structure. Our patient had a recessively inherited form of EDS with an increased risk of cardiac valvular dysfunction. This results in failure to synthesize proα2(I) chains of type I procollagen[9]. Aortic regurgitation occurs by either proximal aortic dilatation or laxity and redundancy of the aortic leaflets and mitral valve regurgitation secondary to mitral valve prolapse. This alteration in valvular flow dynamics increases the risk of sub-acute bacterial endocarditis (SBE). SBE has an insidious onset characterized by low-grade fever, night sweats, chills, fatigability, malaise, weight loss and valvular insufficiency. Septic emboli may disseminate causing distal infarcts or infections. Our patient had classical symptoms and a right foot cellulitis alongside splenic infarcts from emboli. SBE is usually caused by the viridans group of streptococci. However, Streptococcus mutans is rarely reported due to difficulties isolating and culturing the bacteria[10]. Weinstein and Moellering[11] first published a case series of four patients with SBE and two with meningitis who were successfully treated with penicillin and gentamicin. A similar treatment plan was employed in our patient with clindamycin for better skin penetration due to the cellulitis that emerged.

In conclusion, durable bioprosthetic valves can be safely used in patients with contraindications to lifelong anticoagulation. Further studies are needed to evaluate its long-term efficacy. With advances made in transcatheter valve insertions, this may be a viable option for younger patients in the near future.

Performed the transoesophageal echocardiography on the patient: Reid D

Wrote the case report, reviewed and made changes to the structure and format of the manuscript: Singh SSA

Served as the primary supervisor of the manuscript: Curry P

The authors do not have any conflicts of interest to declare.

Patient consent (images/case history) was obtained during the consent process.

The study was approved by the local Clinical Governance Unit after consulting the Local Valve Multidisciplinary Team.

Quantities of Citations Each Year

* All the data come from Crossref