Stab wound with transection of left vertebral artery at V3

While vertebral artery injuries are uncommon, they can have significant morbidity if not identified and treated in a timely fashion. While the majority of vertebral artery injuries are the result of blunt injury and typically have favorable outcomes, a substantial percentage of patients with penetrating injury to the neck may also have vertebral artery injury necessitating angiographic or operative intervention. A 45-year-old male sustained a single stab wound to the apex of the posterior triangle of the neck, below the left mastoid process. At the scene, Emergency Medical Services personnel reported large blood loss and upon arrival, his initial vital signs were consistent with Class II/III hemorrhagic shock. Physical examination revealed a 9 cm longitudinal and deep laceration which began to bleed rapidly and profusely during his inital evaluation. The patient was intubated and rapidly transported to the operating room for exploration of the wound with direct control of the suspected vascular injury via suture ligation and application of vascular clips and to interventional radiology suite for embolization. Operative control was necessary however, immediate post-operative angiography allowed confirmation of collateral cerebral perfusion. The patient had an uneventful recovery and was evaluated in the Trauma Clinic during his 7, 14, 30 and 60-day follow-up.

In a prospective study by Jang et al.,[6] none of the patients experienced secondary neurologic deterioration from vertebrobasilar ischemia, similarly the patient in this case report also did not develop neurologic sequelae. Other studies have also shown that with proper management, patients experience uneventful recovery without residual effects.[1] While neurologic deficits are rare complications of vertebral artery injury, when neurologic deficit occurs, they could be devastating and permanent.[1] Other severe outcomes are complications of stroke, pseudoaneurysm, late-onset hemorrhage, brain stem and cerebellar infarcts, and death;[1,5,8,9] early diagnosis and management are therefore critical to positive outcome.

This case report aims to describe the roles of surgical procedures and interventional radiology in the successful management of emergent vertebral artery injuries.

A 45-year-old male who sustained a single stab wound at the apex of the posterior triangle of the neck below the left mastoid process was transported to the level 1 trauma center by Emergency Medical Services personnel, who reported large blood loss at the scene. Upon arrival, the patient’s initial vital signs were: blood pressure (BP) 106/51 mmHg, pulse 139 bpm. Physical examination revealed a 9-cm longitudinal deep laceration with no active bleeding and the interventional radiologist was consulted. Subsequently, the wound began to bleed rapidly and profusely. Pressure was applied. The patient was intubated; massive transfusion protocol was activated and the patient was rapidly transported to the operating room (OR).

In the OR, the wound was explored by enlarging the incision longitudinally, and interventional radiology (IR) was contacted. Ideally, the patient should have gone directly to IR suite upon his admission. Unfortunately, the patient began to bleed significantly, thus precluding this option. IR however, had already been consulted. In the OR, the goal was to obtain hemostasis through direct control of the vessel; however, the location of the injury at the skull base precluded this. Temporary control in the OR was therefore obtained.

In the OR, the sternocleidomastoid was partially transected. Bleeding was controlled from muscular arterial and venous branches. A deeper wound track in the anteromedial aspect of wound was partially explored and bleeding was controlled. The sternocleidomastoid was re-approximated and the wound was closed. Estimated blood loss (EBL) was 1,100 mL. Total fluid replacement was 3,900 mL: crystalloids 2,700 mL and 4 units packed red blood cells (PRBCs) 1,200 mL.

The patient was transported to the intensive care unit (ICU) pending IR arrival. Immediately upon arrival, the patient became hypotensive with a systolic BP - 55 mmHg. He bled massively. Digital control was established and he was returned to the OR.

Senior trauma surgery staff was paged signal transducer and activator of transcription to the OR. The patient was then re-explored. The longitudinal incision was extended and the sternocleidomastoid muscle was completely transected along with the splenius capitis muscle. Transverse processes of C1-C2 were palpated and the pre-vertebral fascia was entered. The vertebral artery at V3 (third portion) was noted to be partially transected extracranially; it was controlled with vascular clips. Paired vertebral veins were controlled in the same fashion. Hemorrhage was thus controlled. The accessory spinal nerve was not visualized. Bone wax was applied and the wound closed. EBL was 3,000 mL. Total volume replacement was 6,400 mL: crystalloids 4,000 mL, 6 units PRBCs 1,800 mL, 2 units fresh frozen plasma 600 mL.

During the second intervention, a more complete exploration identified the injury thus allowing for definitive control. 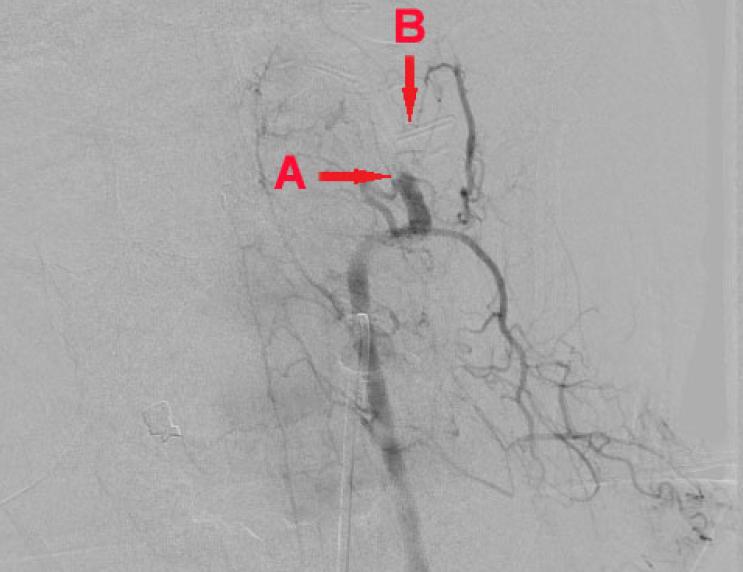 Figure 1. Vertebral artery surgically controlled prior to embolization (A) and digital subtraction shadow of surgically applied clips (B) 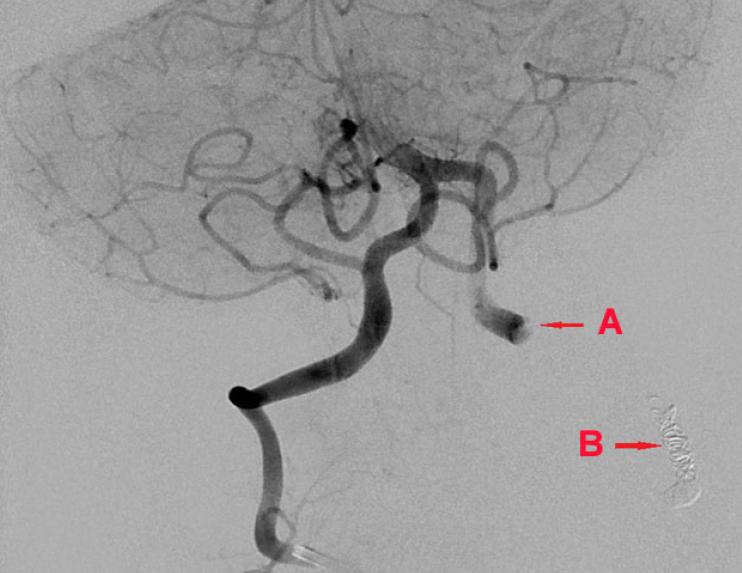 Figure 2. Right vertebral artery angiography after embolization by coils of the very proximal part of left vertebral artery (arrow showing coils, B). Retrograde opacity of the distal left vertebral artery shows persistent extravasation of contrast with an extradural pseudoaneurysm above the surgically placed clips which had controlled all bleeding operatively (A) secondary to vessel transection from the stab wound 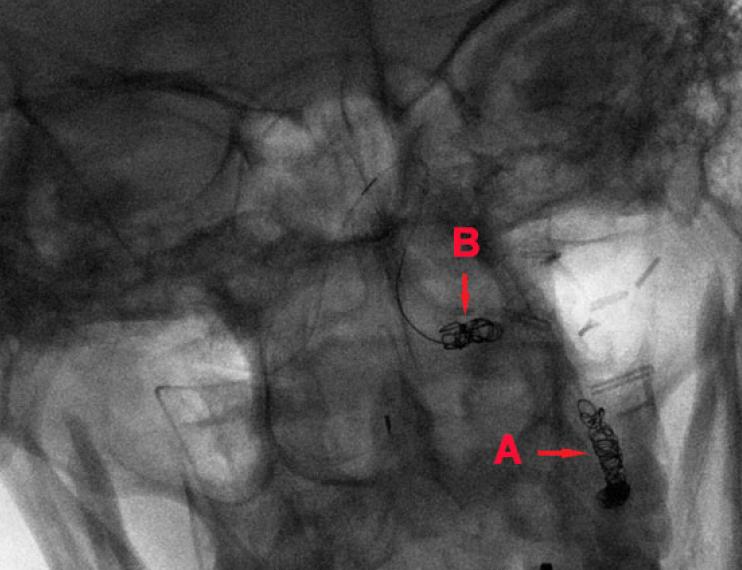 The patient was transferred to the ICU, extubated on the second post-operative day and transferred to the floor. He was observed for 2 days and discharged on post-operative day 4. No problems were noted with balance when ambulating. He had an uneventful recovery. He was evaluated in the Trauma Clinic during his 7, 14, 30 and 60-day follow-up with no sequelae noted from this rare and complex vascular injury.

Penetrating vertebral artery injuries are rare and their injuries were previously missed prior to the routine use of angiography in diagnosing penetrating neck injuries.

This patient specifically, sustained a penetrating injury to the vertebral artery and had hard signs of vascular injury with profuse bleeding at the scene and upon examination of the wound during his initial evaluation. This is the most common presentation in penetrating vertebral artery injury at 50%, while 30% present only with soft signs, and 20% with no overt signs.[2] This frank hemorrhage was the impetus for the decision for operative exploration at the onset. This decision also corresponds to the algorithm suggested by Greer et al.[10] in their series of penetrating vertebral artery injuries managed during the military campaigns in Iraq and Afghanistan. Early operative intervention was also recommended by Reid and Weigelt[11] in their series of 43 patients from 1976-1986; both series agree that patients without acute life-threatening injuries can be safely evaluated without imaging studies (computed tomography angiography, digital subtraction angiography) with minimal risk to the patient.

Vertebral artery injuries though uncommon, could be fatal. Operative management is difficult and requires significant experience, in some cases, definitive control can be achieved through endovascular embolization by interventional radiology. While these approaches are described in the literature, there is little data on the multimodal therapy provided in this patient’s care. Operative control was necessary however, immediate post-operative angiography allowed confirmation of collateral cerebral perfusion. The use of coil embolization in addition to ligation may also decrease the risk of post-operative morbidity such as fistula formation, re-bleeding, and pseudoaneurysm formation. Additional investigation of this approach is therefore warranted.

Not applicable as there is no identifying data.

Not required for this type of publication in our institution. 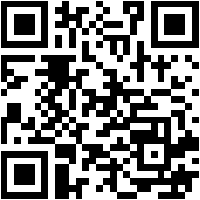