Leriche's syndrome is an aortic occlusive disease, which is due to obliteration of distal aorta above the site of bifurcation of common iliac arteries. The classic triad of symptoms include claudication, impotence, and absent or decreased femoral pulses. It may be acute or chronic in onset. Most of the cases are chronic in nature due to baseline pathophysiology involving atherosclerotic changes in the aorta. There are many causes of acute leriche’s syndrome like surgical manipulation, trauma, thromboembolic disease, hypercoagulability, atrial fibrillation, neoplasm, intraplaque hemorrhage in an aneurysm. Post-surgical Leriche’s syndrome is rare and needs a strong index of suspicion to diagnose. The authors highlight a case of Leriche’s syndrome, as a post-surgical complication and its clinical importance.

Leriche's syndrome is an aortic occlusive disease, which is due to obliteration of distal aorta above the site of bifurcation of common iliac arteries.[1] The classic triad of symptoms include claudication, impotence, and absent or decreased femoral pulses.[2] It may be acute or chronic in onset. Most of the cases are chronic in nature due to baseline pathophysiology involving atherosclerotic changes in the aorta. Risk factors like hyperlipidemia, hypertension, diabetes would aggravate the underlying chronic condition.[1] Acute cases are rare and are usually related to acute thrombus occlusion.

Injuries of the thoracic and abdominal aorta after spine surgery are rare but may result in severe life-threatening complications. Acute and chronic vascular injuries such as perforations leading to major bleeding or hematoma formation, erosions or pseudoaneurysm formation are some of the vascular complications of lower spinal surgeries.[2-4] However, most injuries are delayed due to chronic irritation of the aortic wall.

A 58-year-old male patient presented to the hospital 3 weeks after ALIF surgery at L2-S1, performed due to lumbar spinal stenosis. He reported sudden numbness, tingling and weakness of both lower extremities from the waist down. He had none of these lower extremity symptoms before surgery. Prior to his visit to our Emergency Department (ED), he was discharged from two EDs in last 48 h with the diagnosis of diskitis. Review of the system included new onset leg claudication but no rest pain. The patient had the blood pressure of 140/95 mmHg, a heart rate of 80 beats/min and a respiratory rate of 16 breaths/min, whereas laboratory tests were inconspicuous. His past medical history was significant for osteoarthritis, chronic back pain, and hypertension. There was no prior history of peripheral vascular disease, coronary artery disease, hypercoagulable state or prior thrombosis formation. Only past surgical history included an operative history of ALIF of L2-S1, 3 weeks prior to presentation for lumbar spinal stenosis. He was a chronic smoker with 30 pack year’s history. There was no associated fever, abdominal pain, nausea, vomiting, bladder or bowel incontinence. Initially, all his symptoms were attributed to post-surgical changes leading to pseudo-claudication and other symptoms. At this point, our differentials for sudden sensory and motor deficit in lower extremities were spinal cord compression, spinal cord abscess, retroperitoneal hematoma, and myelopathy.

On physical examination, he was alert and oriented. There was no point tenderness noted on palpation of the back. Abdomen was soft on palpation and normal bowel sounds heard without any tenderness. In the neurological examination, there was a loss of sensation to fine and crude touch in both lower extremities up to the mid thighs (L2-S1) and 4/5 power with +2 reflexes (patellar and ankle). The motor and sensory system of L1 distribution were normal. Babinski’s sign was present bilaterally. Rectal sphincter tone was normal. The patient had no sensory or motor deficits in the upper extremities. I-XII cranial nerves intact. Vitals were stable.

Review of operative note revealed, that anterior aspect of lumbosacral spines was reached by the surgeon through retroperitoneal approach, following left paramedian incision. Exposure of the disks was accomplished after mobilization of left iliac vessels to the right side and retraction by a malleable retractor. During disk removal and positioning the cages, the major vessels were mobilized to right side and protected by the retractor. No direct injury to any vessels or excessive bleeding leading to hematoma was noted intraoperatively. The operative time was approximately 4 h. Routine blood works including complete blood count with differentiation, complete metabolic profile, erythrocyte sedimentation rate, C-reactive protein, creatinine kinase were normal.

Due to a strong suspicion of complications from recent spinal surgery computed tomography (CT) of the thoracolumbar spine was ordered which showed anterior interbody fusion changes at L2-S1 with intact hardware. Mild to moderate multilevel central canal narrowing was noted in CT scan, which was secondary to scar tissue in the anterior epidural recesses, consistent with recent surgical history. The imaging study ruled out any critical central canal stenosis, acute lumbar osseous injury or paraspinal abscess. There was not enough evidence of myelopathy and radiculopathy from the CT and blood works, explaining the symptoms. His condition did not improve despite steroid treatment as well. Then we started looking for vascular causes. CT angiography of abdomen and pelvis was performed, which ruled out intramural hematoma or aortic dissection. However, there was an extensive aortoiliac atherosclerotic disease with long segment occlusive thrombosis of the infrarenal abdominal aorta by a crescentic mural thrombus [Figures 1 and 2]. 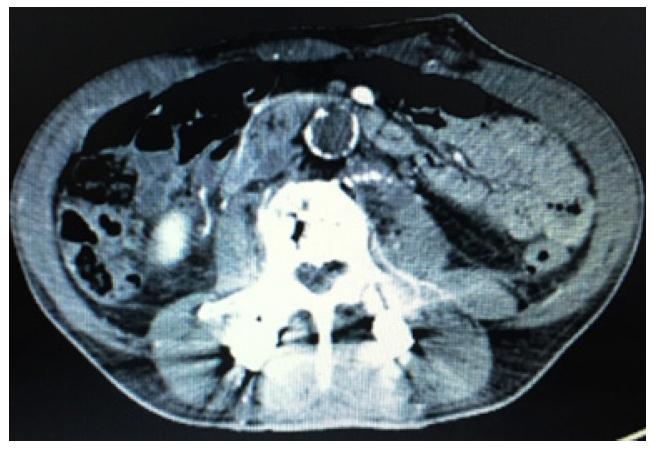 Figure 1. Enhanced computed tomography of thorax and abdomen imaging (sagittal reformation) shows a complete thrombosis of the distal aorta below the left renal artery, extending to the common iliac bifurcations 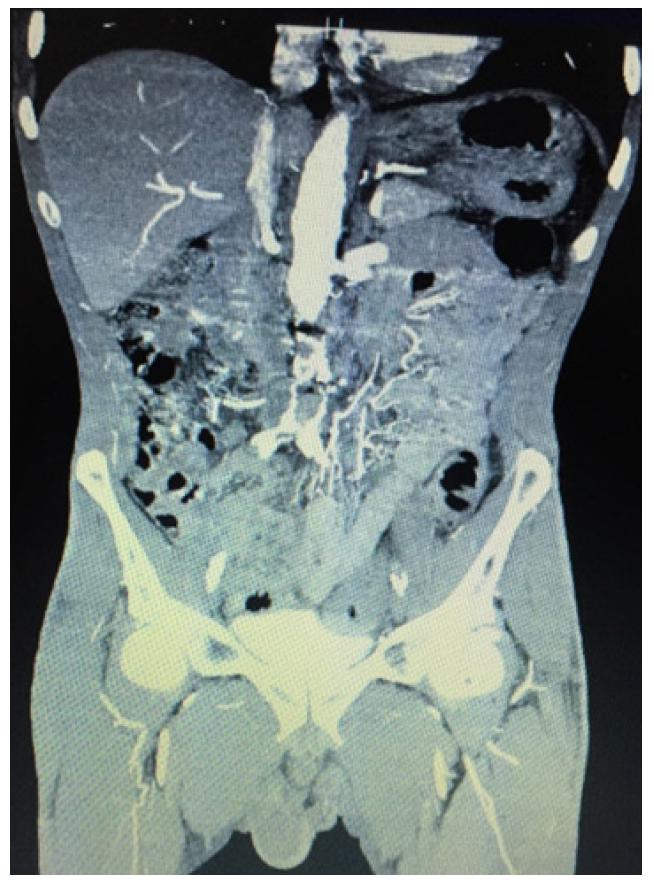 As part of acute thrombosis work up, hypercoagulable studies were normal. No abnormal cardiac rhythm including atrial fibrillation was detected in the telemetry. Transesophageal echocardiography ruled out any left atrial thrombus. There were no compressive lymph nodes or any other structure compressing on the aorta. Diagnosis of acute Leriche’s syndrome was established which was attributed to acute vascular injury following ALIF. The patient underwent emergent aortoiliac endarterectomy and aorta bifemoral bypass. During the surgery, acute thrombus was found in the more proximal infrarenal aorta which was retrieved and then dacron graft was placed. His postoperative period was uneventful with complete resolution of symptoms within next 48 h. Postoperative, the patient was started on antithrombotic therapy. The symptoms completely resolved post vascular surgery interventions and he was followed up as an outpatient after a week. He resumed his regular lifestyle without any residual symptoms. Although the patient had risk factors for Leriche’s syndrome, the acuity of the presentation was attributed to his recent surgical intervention where abdominal aorta was likely traumatized. The injury to aortic endothelium resulted in acute thrombus formation.

Leriche’s syndrome is an occlusive disease of the aorta which is characterized by a triad of symptoms like erectile dysfunction, claudication of thighs and legs and diminished or absent femoral pulse.[6]

There are many causes of acute Leriche’s syndrome like surgical manipulation, trauma, thromboembolic disease, hypercoagulability, atrial fibrillation, neoplasm, intraplaque hemorrhage in an aneurysm. Post-surgical Leriche’s syndrome is rare and needs a strong index of suspicion to diagnose. Surgical treatment of adult lumbar spinal disorders is associated with substantial risk of intra, peri, and postoperative complications.[7] A systematic review conducted by Wood et al.[8] showed that vascular injury in elective anterior lumbosacral surgery is less than 5% and complications being thrombosis, pulmonary embolism, and prolonged hospitalization. It is shown that vascular complications after ALIF range from 1.9% to 5.6% in the general population.[5,9,10] The vascular complications can be in the form of acute thrombosis, retroperitoneal hemorrhage, and injury to the major blood vessels.

We highlight the rare case of acute Leriche’s syndrome following ALIF surgery which was initially misdiagnosed. Firstly, the patient’s presentation of sensory and motor impairment misled physicians to have an impression of neuropathy. Secondly, ischemic neuropathy is rarely caused by Leriche’s syndrome.[11,12] Another reason for misdiagnosis is his recent spinal surgery. Though the patient was at risk for thrombus formation due to risk factors and atherosclerosis, the interesting part was the acute presentation of symptoms. There was a case study in 2003 which reported 8 cases arterial complication following ALIF in which possible risk factors were analyzed. The authors encountered 6 cases of common iliac artery occlusion and two cases of acute vasospasm as a complication of ALIF.[5] Another article in 2010 documented the incidence of vascular complications during ALIF in 212 consecutive patients, out of which 13 (6.1%) vascular injuries occurred of which 5 were major (38.5%). One major arterial injury (0.5%) occurred and required arterial thrombectomy and stent placement.[9] A case report of an acute Leriche-like syndrome after posterior instrumentation of the spine highlighting iatrogenic trauma to the aorta during spinal surgeries was described by in a 47-year-old female who developed an acute occlusion of the infrarenal aorta after posterior transpedicular instrumentation of an L1 burst-fracture.[13]

In the literature review, it was found that ALIF surgery at L2-L5 levels is most likely prone to cause vascular injury,[3-5] just as the procedure in our case. The explained reason is that left common iliac vessels normally transverse the prevertebral space the L4-5 interspace, and thus prevents direct access to the spine. These vessels must be mobilized with the help of retractors from left to right to expose the bony midline.[8] And there might be a progression of the injury from iliac artery upwards to the aorta. We believe the retraction of vessels can promote thrombus formation, through a mechanical injury to the intima of the artery. The mechanism of thrombus formation is detailed below. The retraction of the artery is considered as a non-penetrating arterial injury which has been shown that stretching of the artery can cause a rupture of the intimal layer.[14] The second reasoning is vascular retraction causes turbulent flow near the retraction site. The disturbance in normal flow cause platelets to adhere to the injured endothelium and lead to the process of primary hemostasis.[15] The turbulent flow also prevents dilution by fresh flowing blood with activated clotting factors, which promote secondary hemostasis and eventual thrombus formation.[15] The aortic occlusion of Leriche’s syndrome is usually caused by diffuse atherosclerotic changes, exacerbated by smoking, diabetes, hypertension, and hypercholesterolemia.[1] However, iatrogenic trauma to the blood vessels as a cause for thrombosis has been documented.[16]

The retraction of iliac vessels in our case during ALIF could have promoted endothelial injury leading to thrombus formation. In addition, smoking itself can promote hypercoagulability via unknown mechanisms.[15]

Appropriate consent was obtained from the patient regarding the usage of details for educational purposes.

This case report is waived for ethical approval. 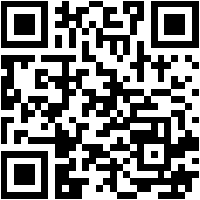